From Michèle Lamy’s boxing ring to Gucci’s millennial-pink Instagram haven and The Rolling Stones’s merch stand, Selfridges’s Corner Shop has become London’s premiere experiential retail space. Next up, and pushing the boundaries of what’s possible in a 1250 sq ft space, is Prada, whose “Prada Escape” concept takes customers, or rather “world travellers”, to its shoppable campsite.

Imagine the functionality of Prada’s signature nylon backpack – which was initially made in a military parachute factory and now comes in a greener alternative, regenerated nylon – but rolled out across all products. Outerwear becomes more utilitarian with the addition of cargo pockets and extra zips; accessories up their practicality thanks to drawstrings, roller-buckles, straps and rings; and there’s site-specific merch, such as reusable water bottles, traveller’s notebooks from Japanese stationer Midori; and camouflage-wrapped chocolate bars created by Milan pastry connoisseurs Marchesi 1824. 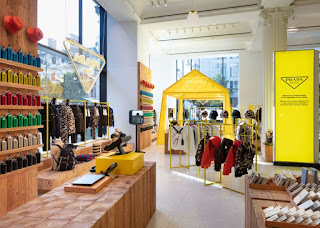 “Prada Escape has a wide-ranging offer of womenswear, menswear and accessories edits, as well as a selection of exclusive pick-up items with a touch of iconic Selfridges yellow,” Sebastian Manes, Selfridges executive buying and merchandising director, shares. “This is the first time we have let a brand use the colour throughout the space – normally, the nature of it means that everyone can create a world that is completely their own.” His personal must-have is the affordable confectionary, which is surely the epitome of Instagram fodder.

When Mrs Prada first conceived her now-iconic nylon accessories in 1984, it was “really an idea”. “I was searching,” she told Vogue in 2018, “because I hated all the bags that were around. They were so formal, so lady, so traditional, so classic.” Decades later, her alternative approach to “the traditional, conservative idea” of what is stylish has been pushed to the outdoorsy extreme in a major department store. Selfridges knows that it will still sell.
Posted by FASHIONmode News at 5:39 PM