“This Is A Time For Boldness”: Extinction Rebellion On Why It Is Boycotting London Fashion Week

When the climate campaign group Extinction Rebellion occupied five prominent sites in central London in April 2019, just six months after it launched, it became one of the biggest civil disobedience events in recent British history. Over 11 days of demonstrations, thousands of activists marched, blocked bridges, glued themselves to trains and parked a pink boat in the middle of Oxford Circus. A total of 1,130 protesters were arrested, 10,000 police officers were deployed and an estimated half-a-million people were affected by the disruption.

Since then, the movement has gained a global following: its Berlin branch chained themselves outside Angela Merkel’s Chancellery; protesters in Paris blocked the Pont de Sully bridge over the Seine; and campaigners in New York stopped traffic outside the The New York Times, urging the newspaper to take action (it eventually scrapped plans to sponsor one of the world’s biggest oil industry conferences).

Up next? Another demonstration in the UK capital, this time calling for the cancellation of London Fashion Week. Targeting show venues as well as the British Fashion Council’s headquarters in Somerset House, the organisation will stage disruptive events from 13 to 17 September, which will culminate in a funeral procession called London Fashion Week: Rest in Peace.

Ahead of the protest, Vogue meets Extinction Rebellion activists Sara Arnold and Jessie Brinton to discuss their plans – and find out why they’re holding the fashion industry to account. 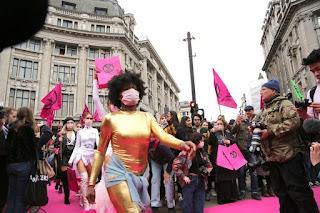 Tell us about the funeral you have planned for London Fashion Week.

Sara Arnold (SA): “Some of the press have said that we’re shutting down London Fashion Week. We’re not. The actions we’ve planned are largely symbolic. We’ll walk from Trafalgar Square to 180 The Strand starting at 5pm on 17 September, the last day of London Fashion Week. When we get to 180 The Strand, we’ll do a ‘die-in’. We’ll drop to the ground on the streets outside and block the road. The funeral is to commemorate the lives that have been lost from this crisis. It’s about giving people space to grieve and reflect.”

Jessie Brinton (JB): “This is a time for boldness. We have to shift the conversation and you can’t do that gently. Everything else has been tried. We’ve been talking about sustainability since the 1970s and it hasn’t worked. Now, we have to do something new.”

What response are you hoping for from the industry and beyond?

SA: “We weren’t expecting London Fashion Week to be cancelled this time, but we have to make people realise that these things are coming to an end whether we like it or not. The UN Secretary General says we have until the end of 2020 to change course. The fashion industry is completely out of sync with the crisis that we’re in, and if fashion week goes on next season it’s going beyond that deadline. Abrupt climate breakdown is happening right now and it only gets worse, so we need to stop business as usual. Plus, London Fashion Week is hugely influential. There’s a fire alarm going off and it takes that first person to get up and walk out for others to follow. We need the fashion industry to be that person.”

Will there be Extinction Rebellion protests during New York, Milan or Paris fashion weeks?

SA: “Extinction Rebellion started out in the UK, but now we have groups all over the world. We will be communicating with our members in other cities and sending out a guide on how to boycott fashion to our international teams, but how they take that forward will be up to them.”

Will you also be boycotting fast fashion?

SA: “We have done in the past, with people going into fashion outlets and shopping malls for ‘die-ins’. We’ll continue targeting them, but what we’re doing at London Fashion Week is about the industry as a whole. Fast fashion is seen as the worst perpetrator, but that doesn’t mean luxury fashion is off the hook. The brands at London Fashion Week see themselves as leading the way, so of course they have something to answer for.”

What about designers who are promoting sustainable practices?

SA: “We spoke to Katharine Hamnett a while back, and there are other designers — Martina Spetlova, Patrick McDowell, Phoebe English — who support us, and I hope will continue to do so.

We’ve also been talking to the British Fashion Council and Caroline Rush about how we can have our voices heard on the inside. We’re hoping to have some kind of presence in 180 The Strand within the Positive Fashion space. I hope we can do a version of our ‘Heading for Extinction’ talk. It’s an overview of all the science and a look at the social aspect too, including why non-violent direct action is the best way to tackle this problem.”

What’s next for you after London Fashion Week?

SA: “We need the system to change and that will happen when everyone takes to the streets for the rebellion on 7 October. There will be a blockade of Westminster as well as key infrastructure within London that contributes to the crisis, and we’ll block it for as long as it takes. We have three demands — tell the truth, act now and go beyond politics — and we need the government to make headway on those demands by October.”

JB: “Whatever happens, we won’t be going away — we’ll just grow. The movement is only going to go in one direction because the science isn’t going to change.”

What message do you have for Vogue readers?

SA: “Join us in October. Either strike from work or bring your work to the streets. If you have a position within a company, give your staff permission to strike and support them if they get arrested. If a lot of people take to the streets, we can achieve our demands quickly.”

JB: “We all need to look at the world through a new lens and keep talking about this issue. Nowadays, you see a headline and react, but then the news cycle moves on and suddenly you’re back in a world where it’s not happening anymore. I find myself doing this sometimes, I think it’s called functional denial. But climate change is happening, and the time to act is now.”

Posted by FASHIONmode News at 6:11 PM