Pyer Moss was announced as the winner of the 2018 CFDA/VogueFashion Fund tonight at a dinner and fashion show held in the Brooklyn Navy Yard. Designer Kerby Jean-Raymond accepted the award from actress Emily Blunt. His collections have been lauded for their celebration of black culture in America, landing on Vogue’s best collections of Spring 2019 list. Jean-Raymond will receive a $400,000 prize as the winner of the prize.

Emily Adams Bode of the menswear brand Bode and Jonathan Cohen took home the runner-up prizes of $150,000 each. Bode’s menswear, now in its second year, has been praised for its sustainable practices and focus on craft. Jonathan Cohen’s womenswear is notable for his use of print and texture. He founded his label in 2011. 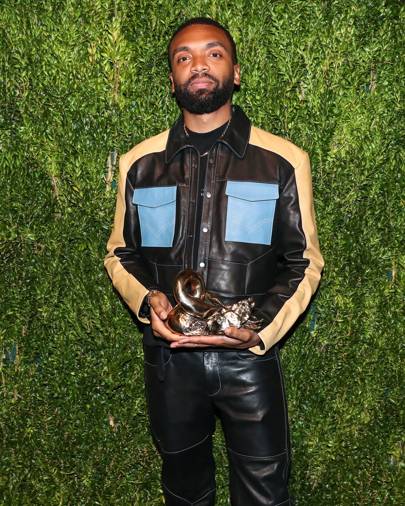 “At a time when our world faces so many challenges, I’m impressed by this year’s winners,” said Anna Wintour, Editor in Chief, Vogue and Artistic Director, Condé Nast. “Their work highlights a high degree of creativity and a deep-rooted commitment to the notion of community. They’re not only a credit to the CFDA/Vogue Fashion Fund as it celebrates its 15th anniversary, but also to the optimism and inclusivity of the very best American fashion.”

Jean-Raymond, Bode, and Cohen were joined at the event by CVFF winners of the past, including inaugural winners Jack McCullough and Lazaro Hernandez of Proenza Schouler. “For 15 years, the CFDA/Vogue Fashion Fund has provided emerging talent with a path to become tomorrow’s American fashion leaders,” said Steven Kolb. To this year’s winning trio we say: Consider yourselves in good company.

Posted by FASHIONmode News at 9:02 AM