Roland Mouret has just published a book about his life and work, Roland Mouret: Provoke, Attract, Seduce, with Rizzoli. The name is an indication of Mouret’s approach to design; just think about that iconic Galaxy dress of his which first appeared in 2005, a glorious form-fitting number that seemed to spring forth from a particularly steamy ménage à trois between fabric, cutting technique, and the female form. Yet the title could just as easily refer to the approach the London-based French designer has taken with his book, because here’s the thing: While it’s an overview of his 20-year career as a designer, it’s also a fascinating (and original) way of deconstructing his own biographical narrative.

Roland Mouret has chosen to present many of his past designs in new fashion stories specially commissioned for the book, styled by his long-standing collaborator and coconspirator Sophia Neophitou, who oversees the 10 Magazine publishing empire. (Rather brilliantly, every piece is also shot as a straight still life for a section toward the end of the book, a forensic-like representation of what has gone before; how very Roland to not leave anything openly shown.)

Interspersing these are insightful and illuminating conversations with the writer and fashion critic Alex Fury; these dialogues only underscore how much Mouret is a designer who aligns cerebral analysis of his work and his relationship to the women who wear his clothes with raw and instinctual emotion. Unlike so many other designer monographs, there’s no shellacking of brand identity here, the bland self-preservation of commercial necessity. Instead, Mouret has chosen to honestly see his past through the prism of the present. You can’t, after all, provoke, attract, and seduce if you’re not in the here and now. 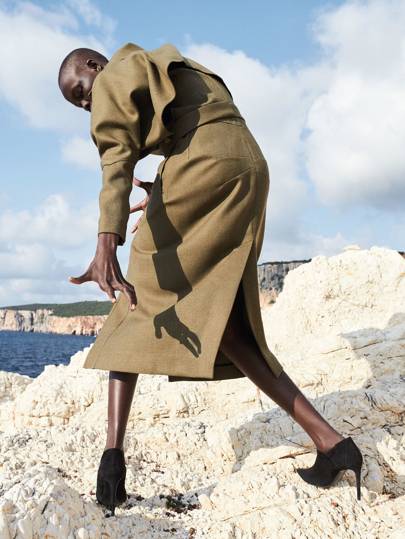 Why did you decide to do a book now, Roland?

I’ve thought for years that the only time that I would do a book was after I was dead. I never wanted a retrospective, but to be a statement about what I’ve learned, what I did, and what and who is still relevant.

I like the way you’ve reimagined so many of your previous collections with new imagery; tell me how that came about?

It took a full year to do the book. The photo shoots were done by Sophia between photographing our lookbooks, certain shoots were done in London, there was one in LA when she did a work trip and added on a few days. It’s really nice to work with Sophia. We’ve worked together for so many years, she’s so present in my life, she was able to bring a logic to the book and to the different chapters. There are stories you can experience by themselves, yet they’re also the chapters of my life; we picked the clothes that suited those the best.

You don’t shy away from chronicling your life or your work in a very open manner; the flaws are there as much as the beauty.

I don’t want to aggrandise myself. I consider the openness a strength; to speak to what could be my taboos and my weaknesses. I’ve talked about them all. You can’t attack me for them. I have no shame. The journey I’ve been on has created the magic of what I’ve done. I’m telling you how my life has been; to be honest about my creativity and my sexuality.

Your clothes have always had this incredible intimacy with, and affinity for, women. That feels really evident in your book too.

From the very beginning it was always going to be about pure honesty. If I gave it to the woman who wears my clothes, I don’t want it to change her way of thinking about those clothes; the book is as personal as what I design. They’re both so personal I’d want her to be touched by the experience of each of them.

Posted by FASHIONmode News at 10:24 AM