The Peter Pilotto wedding gown that Princess Eugenie wore to wed Jack Brooksbank on October 12 was widely publicised – from the personal symbols that were interwoven on the corseted silhouette to the low back that the bride specifically requested to show the scars from her childhood scoliosis surgery. The same was not the case for her second gown – a blush-pink Zac Posen confection she commissioned for the reception in Windsor Castle's Royal Lodge.

Due to the private nature of the party, only one picture (captured by the wedding photographer, Alex Bramall) was released of the Queen's granddaughter wearing the rosy silk gown – which, according to Buckingham Palace, was inspired by the "beauty of Windsor and the surrounding countryside". Now, its creator has shared details of the bespoke number. 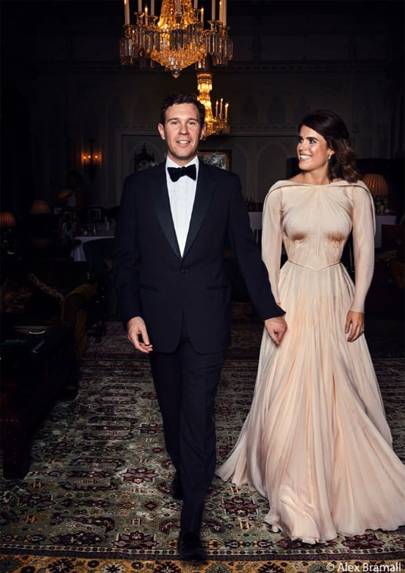 Posen took to Instagram to share two shots taken inside his New York atelier alongside the caption: "The back by popular demand, before the final #whiteroseofyorkembroidery was placed.” The images show delicate buttons uniformly stitched down the back of the dress and a long train cascading down from its shoulders. As the designer mentions, the only detail that hadn't yet been added when the photographs were taken was the White Rose of York, which was embroidered onto the shoulder of the dress to pay homage to Eugenie's roots as Princess of York.

At the time, Posen said that it had been an “incredible honour” to create a dress for the royal's special day, adding that "her grace, elegance and strength perfectly embody everything I could hope for in a woman wearing our design”. The 28-year-old chose to accessorise with diamond and emerald drop earrings – a wedding gift from Brooksbank – and a hair slide that was once worn by Queen Victoria in order to let her Posen dress take centre stage.

Posted by FASHIONmode News at 12:52 PM