Ralph Lauren is the first American fashion designer to be recognised with an honorary British knighthood. The insignia will be presented to the creative, businessman and philanthropist by a representative of the Queen during a ceremony next year.

"Mr Lauren has played a key role in forging transatlantic cultural and economic connections," said Antony Phillipson, British Consul General to New York and Her Majesty’s Trade Commissioner for North America. "As creator and visionary of the Ralph Lauren brand worldwide, he has been a vanguard for the global fashion industry and American style for nearly half a century. In addition, monumental philanthropic efforts, especially in the realm of public health, cancer research and treatment in both the US and the UK, have led to benefits felt by citizens around the world.”

The news falls in line with his brand’s 50th birthday year. In June, the Council of Fashion Designers of America recognised Lauren’s global effect on fashion and his leadership in the industry with a CFDA Members Salute.

The accolade bestowed on behalf of the 500-plus CFDA members was the first of its kind, and a special way to celebrate the man who was honoured with the CFDA Lifetime Achievement Award in 1991 and the CFDA American Fashion Legend Award in 2007. 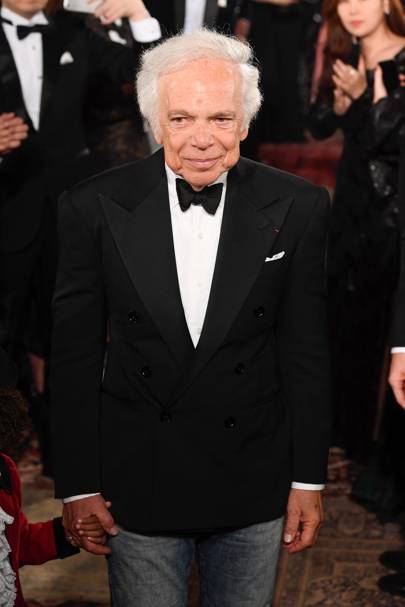 “From starting with a tie at Bloomingdale’s to building a global brand, I respect and admire everything that Ralph Lauren stands for, including his philanthropy and kindness,” CFDA chairwoman Diane von Furstenberg said at the time. The sentiment was echoed by by Oprah Winfrey, who made a speech at his 50th anniversary show staged at Central Park's Bethesda Terrance Tunnel in September. “What I know for sure is what is real is what lasts. And we are here because you have lasted,” the media icon addressed Lauren’s supporters.

The man himself, meanwhile, took a modest reflection of his five decades in the business. “I’ve been very lucky. I like working. I like to dream. I don’t dream this big,” he waved at the numerous dining tables lined up around the Bethesda Fountain, “but it makes me look very big tonight.”

Posted by FASHIONmode News at 12:21 PM