An Ode To Ezra Miller, A$AP Rocky And The Men Disregarding Clothing Labels

After a spring/summer 2019 season, which not only blurred the lines between womenswear and menswear, but forcefully tried to eradicate them, genderless fashion has never been such a positive proposition. And lately, a handful of gents have lined up to flex their creative muscles at wearing what is labelled womenswear - but should arguably have no label at all - to support what we’ve been witnessing on the runways.

Step up Ezra Miller, who you’ll now know better as Hedwig, owing to the snow-white plumage he wore to the London premiere of Fantastic Beasts: The Crimes of Grindelwald. It was Givenchy Haute Couture, no less. The actor, who had the fashion pack practically queuing to high five him after his previous turn in a jet-black Moncler x Pierpaolo Piccioli puffer coat, offset his feathers with charm. No literally. He penned “Avada Kedavra”, the deadly spell from Harry Potter, onto his palms for a witchy effect heightened by metallic hair and make-up accents. JK Rowling fans were beside themselves with delight and Twitter all of a frenzy as editors and Potterheads united over a red-carpet moment that would have looked perfectly at home on Cate Blanchett or Tilda Swinton.

Next, to the music industry, where the likes of A$AP Rocky and Travis Scott seem to have taken the womenswear baton from Kanye West and Pharrell to show just who wears the skirts now. If you missed A$AP’s granny moment in his floral silk Gucci scarf at LACMA’s annual art and film gala then, quite frankly, where have you been? 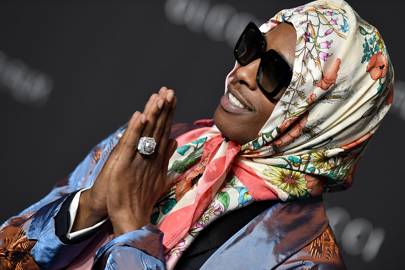 “I just wanted to show off my babushka today, honestly,” the A$AP member enthused of his accessory, which means grandma in Russian. “I'm just encouraging all guys to wear babushkas from here on out. Silk gang, silk city. You know how we do it.” A regram of a @siduations post later captioned with “BABUSHKA BOI” seemed to say it all. A$AP thought he looked “handsome” and boi, he did.

Travis Scott, meanwhile, dipped into the archives for a carefully curated Instagram moment this week. Wearing a foulard blouse from Céline’s spring/summer 2011 show, was the rapper making a Philophine brag? A nod to West, who wore the same shirt at Coachella circa 2011, perhaps? Whatever the messaging, the geometric print spoke volumes to #oldceline followers.

Of course, men have worn women’s clothing on countless occasions – from Freddie Mercury’s stage look created from a Zandra Rhodes wedding dress to David Beckham’s sarong, Jaden Smith’s skirted Louis Vuitton campaign, and every brilliant being in-between. And yes, it might seem trite to send out a public service broadcast every time a man disregards tags and wears *shocker!* what he actually likes. But until stores actually adapt and change their labels to reflect how society shops and dresses, then we have to salute the individuals who walk their own path. Babushkas unite.