Kering Takes A Stand Against Cyberbullying

Saint Laurent, Gucci, Balenciaga and Alexander McQueen are among the brands taking a stand against cyberbullying this month as part of the Kering Foundation’s White Ribbon for Women campaign.

This is the first time in its 10-year history that the international luxury group’s brands will be involved in fundraising efforts, donating 10 per cent of the retail price of selected products and lines across 1,300 stores from November 16 to 30. Philanthropic purchases include Balenciaga’s Puppy and Kitten bag, Bottega Veneta’s Ellittica tote, Saint Laurent’s logo hoodie and T-shirts and Gucci’s cat eye sunglasses and shoulder bags, among others from the likes of Brioni, Boucheron, Pomellato, DoDo and Alexander McQueen.

As is now tradition, the Kering Foundation has also designed a campaign to coincide with the International Day for the Elimination of Violence Against Women on November 25. This year they are targeting Gen Z, calling on them to “break the chain” of abusive comments made online and highlighting the very real effects of hate speech, including stress, trauma, anxiety and depression.

Research conducted by the United Nations Broadband Commission found that women are 27 times more likely to be bullied online than men. 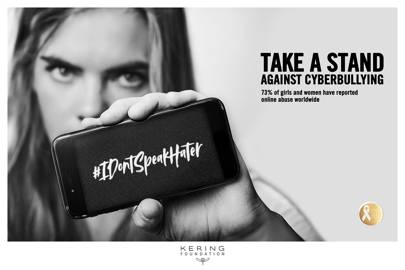 “Everyone has the right to feel safe online,” says Kering CEO and chairman François-Henri Pinault. He and the foundation he started in 2008 believe that bystander intervention is essential in tackling the global pandemic of cyber violence, which includes hate speech, hacking, identity theft, stalking and threats. “Ignoring abuse allows perpetrators to continue in impunity and contributes to the mainstreaming of violence against women and girls,” reads the campaign manifesto.

“Kering once again demonstrates outstanding leadership by taking the lead with its campaign against cyberbullying, ” says Jonathan Newhouse, chairman and chief executive of Condé Nast International. “The effort to stamp out violence in all forms is more urgent and relevant than ever.”

Born from 1995 onwards, Generation Z has truly grown up in the age of the “social internet”, and though many social media networks have taken action to facilitate the reporting of hate speech, there is still so much work to do.

With #IDontSpeakHater and IDontSpeakHater.org, the foundation calls on everyone to speak out against abusive comments, countering insults and hate speech with wit and humour. The campaign will include a series of videos, featuring a team of international influencers including Edward Sad and Slim. Set against a neutral backdrop, they will react to real examples of cyberbullying, neutralising the abuse with positive, empowering responses in a rap battle-style.

Posted by FASHIONmode News at 12:48 PM