Balmain is returning to the couture calendar for the first time in 16 years. Leading the charge is Olivier Rousteing, who has been at the creative helm of the house since 2011 and is widely credited with boosting the brand’s profile through his Balmain Army – an inner circle of internationally famous poster girls, including Kim Kardashian West and a handful of Victoria’s Secret models.

Speaking at WWD’s Retail & Apparel CEO Summit, the French designer said that he is “looking to bring back the Parisian DNA” by reviving the couture division. The January haute couture shows will premiere his inaugural Balmain output as a couturier, but, he revealed, he has his sights set on accessories, fragrance and cosmetics too.

Indeed, the Balmain expansion plan is firmly underway. In May 2017, Rousteing partnered with L'Oréal Paris on a collection of Balmain lipsticksthat he had designed himself. At the time he told Vogue that the collaboration was rooted in three things: “First, the savoir faire, which means couture to me. Second, diversity, because this is a topic that is really important to me. And third, modernity.” 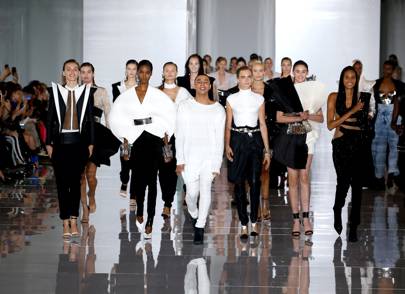 As with his Victoria’s Secret collaboration the same year, and his H&M collaboration in 2015, Rousteing welcomed the chance to make his creations available to a wider audience through lower price points. “A lot of people love Balmain but can’t afford it, and with the lipstick they can get into the Balmain universe in an affordable way,” he said. “I create a world that is expensive because with Balmain it’s luxury, but if you think of my ideas and ideologies it’s more than a price on the clothes,” he explained.

Though couture does not support the affordable aspect of the business model, it will certainly expand Balmain’s world and, crucially, underline all of Rousteing’s efforts with real craftsmanship and integrity.

Posted by FASHIONmode News at 9:58 AM