Gwyneth Paltrow has finally released her wedding photos, along with details about her very private nuptials to TV producer Brad Falchuk.

The couple initially met in 2014 on the set of the popular comedy drama series Glee (which Falchuk co-created with Ryan Murphy), and after three years of dating, they revealed in November of 2017 that they were engaged, saying in a joint statement: “We feel incredibly lucky to have come together at this juncture in our lives, when our collective successes and failures can serve as building blocks for a healthy and happy relationship.”

The wedding took place on a late summer weekend in September and included a full roster of festivities, kicking off with Paltrow celebrating her 46th birthday on Thursday night. On Friday evening, Jessica and Jerry Seinfeld hosted the rehearsal dinner at their idyllic home in East Hampton, then the couple’s ceremony was held on Saturday at Paltrow’s house nearby. There, the two said their vows before an intimate audience of just 70 friends and family. 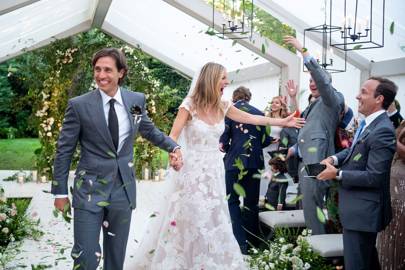 Early on in the planning process, the 45-year-old actress revealed that she’d never had a proper wedding to her first husband singer Chris Martin. (They tied the knot quickly in 2003, with no family in attendance.) She went on to explain that as a result she was really looking forward everything, going on to say: “So even though I’m 45, I sort of feel like a 21-year-old.”

And on her wedding day, Paltrow looked every bit the blushing bride. Wearing a cap-sleeved lace Valentino dress with a swiss dot pattern throughout, a fitted bodice, and a cathedral length veil, her blonde hair framing her face in soft waves, the Oscar winner turned entrepreneur’s bridal look was picture perfect as she made her way up the painted white wooden aisle lined with hurricane lanterns. Guests looked on as the couple exchanged rings under a translucent tent filled with greenery, and as they recessed back down the aisle to cheers, they were showered with pink and white rose pedals.

After the ceremony, everyone enjoyed a seated dinner by chef Mario Carbone before dancing all night long. Just as soon as the newlyweds had recovered from the late night, they jetted off for a mini-moon in Umbria and Paris before heading to England for the opening of goop’s first international store in London. There, they took the party international, continuing to toast their nuptials with close friends including Stella McCartney, Valentino and Giancarlo Giammetti, Liv Tyler, Demi Moore, Elizabeth Saltzman, and more.

Posted by FASHIONmode News at 8:56 AM