After travelling the world, from Kyoto to Rio de Janeiro, Louis Vuitton is bringing its resort show to New York. On May 8 2019, just two days after the Met Gala (and the day before his birthday), Nicolas Ghesquière will present his cruise 2020 collection in New York. The designer announced the news on his Instagram with a video montage of past resort locales.

Louis Vuitton is not providing any additional information about the show just yet, but judging by past affairs it’s sure to be star-studded and held in an architectural masterpiece. Ghesquière’s first cruise collection for LV was staged in a John Lautner–designed house in Palm Springs that once belonged to Bob Hope. It was followed by a presentation at Oscar Niemeyer’s Niterói Contemporary Art Museum in Rio; a show at Kyoto’s Miho Museum; and last May’s event at the Fondation Maeght in southern France. 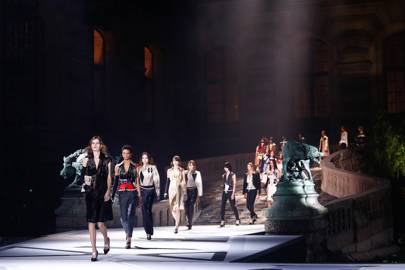 In New York, LV has held events at the former stock exchange, the South Street Seaport, and in a pop-up shop in the Meatpacking District – chances are the brand will opt for a new venue with stunning design. The Frank Gehry – designed Guggenheim is an obvious option, as is the Jean Nouvel–designed MoMA tower set to open in 2019. The teaser video Ghesquière posted features shots of the Brooklyn Bridge and several skyscrapers.

In coming stateside, Louis Vuitton joins Chanel and Versace, which will host pre-fall shows in New York this December, and Prada, which showed its resort 2019 collection in its midtown headquarters. As with past collections, Ghesquière will likely draw on local sources of inspiration – place your bets now on Milton Glaser graphics, AbEx references, or maybe a new status tote for the subway emblazoned in LVs.

Posted by FASHIONmode News at 12:50 PM