In the 1996 film The First Wives Club, three divorced, middle-aged women played by Diane Keaton, Goldie Hawn and Bette Midler come up with a plan to enact revenge on their cheating husbands, each of whom left them for a younger woman. In the film’s final scene, Keaton, Hawn, and Midler’s characters take part in an intimate, impromptu performance of “You Don’t Own Me” while wearing white suits. Fabulous? Yes, but it also has a movie moment message: Taking out your frustrations on ex-lovers may feel sweet for a minute, but in the end, working on empowering yourself, and others, is time better spent.

This message has resonated with Ariana Grande. She re-created the iconic final scene from the film on The Ellen DeGeneres Show, where she performed her breakup anthem, “Thank U, Next,” for the first time. With two dancers, she even put her own spin on the trio’s all-white ensembles, simply replacing their formal peak-’90s skirt suits with a more youthful blazer dress. She finished it all off, in classic Grande fashion, with a high half-ponytail and a pair of heeled, thigh-high boots. 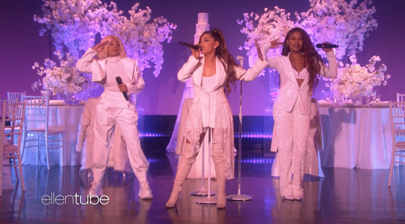 The First Wives Club is not just a convenient reference for Grande, either. Apparently, it’s also her favorite film. In 2014, she tweeted about quoting the movie on a daily basis, and you can hear some if its influence on her new single, “Thank U, Next.” What could have been a petty kiss off to her famous exes is actually a surprisingly tender song that instead focuses on what Grande has learned from each of her much-publicised relationships.

Given Grande’s fitting tribute, the time is right for the much-delayed sequel to The First Wives Club to come together. It’s not too difficult to imagine her dancing alongside Keaton, Hawn, and Midler in what would be a full-circle moment of hard-earned redemption.