What Does Michael Kors’s Power Move Mean For Versace – And Fashion?

Versace: the epitome of Italian glamour founded by a dynasty so famous its reputation precedes it. Michael Kors: an American brand also afforded household-name status, largely through the ubiquity of its affordably-priced handbags. At first glance, they appear to have little in common. But now, the latter has decided to change its fortune and forge its own path into a conglomerate-in-the-making, entitled Capri Holdings, and it's first real power move has been to snap up the former. Versace now sits under the umbrella of Capri Holdings.

If fashion editors have privately expressed surprise; for market-watchers, the transaction was largely expected. After acquiring Jimmy Choo in 2017 for $1.2 billion, John D. Idol, Michael Kors CEO, made it quite clear that another purchase was on the agenda. “Our focus is on international fashion luxury that are industry leaders,” he told press, upon closure of the deal. Versace, meanwhile, had been touted as an attractive proposition for a while, so Kors flexed its muscle and secured the house over competitor conglomerates. These include Tapestry Inc, which owns Coach and Kate Spade and is also vying to become a major US luxury group, and Kering, the European example Kors hopes to ape.

Upon the announcement of the $2.1 billion Versace acquisition on September 25, Idol recognised that it was “an important milestone for our group”. The Italian label has a heritage that adds unquantifiable value to the fledgling company, something that neither Michael Kors nor Jimmy Choo has been able to assimilate. Capri Holdings, on the flip side, has the financial clout to harness Versace’s credibility, bolstering the rest of the brands in its portfolio. Donatella Versace knows that her brand retains unique appeal. In the official press release pushed out when the deal broke, she stated: “I am proud that Versace remains very strong in both fashion and modern culture.” But what does the future actually hold for the new colleagues, and how will they work out a successful working relationship that’s mutually beneficial?

Versace's closing comment that her “passion has never been stronger” suggests that she will remain in full creative control of the collections, and while Capri Holdings is finding its feet as a parent company it would be wise to trust the creative director’s instinct over its own. Indeed, Idol "categorically rejected any suggestion that Ms. Versace would leave the brand after a face-saving amount of time had elapsed, or that another designer would be brought in," during an interview with the New York Times. To that end, Capri Holdings has pledged to build on Versace’s runway momentum. But it has also promised to expand accessories and footwear from 35 per cent to 60 per cent of brand revenues. Expect to see the supers and social-media stars who strut down its catwalk season after season carrying a lot more handbags in the future.

Donatella will have seen this coming – it’s no secret that accessories are the bread and butter of brands – and Versace will surely be pleased at the push Capri Holdings has pledged to give its e-commerce platforms and omni-channels. The promise of 100 new stores across US, European and Asian markets, however, raises questions about dilution. A brand store in every major airport around the globe does not a covetable label make, and could send mixed messages to customers who observed 42 Versace stores close in 2017. 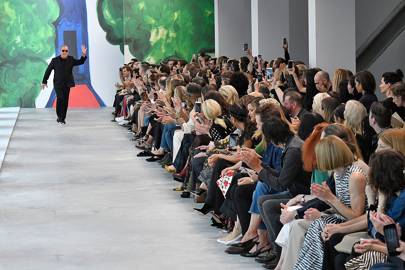 Still, Capri Holdings, whose name is taken from the Italian isle off the Amalfi Coast, is aiming high. It expects that the acquisition of Versace will help grow Capri Holdings’s revenues to $8 billion in the long term, with $2 billion being generated by Versace. This is a heady jump from the revenue prediction of Jonathan Akeroyd, Versace's chief executive, who hoped for sales of more than €1 billion in 2018. Donatella might have declared that “creativity and innovation [will still be] at the core of all of Versace’s actions” but she will need to design accessories that garner cult status quickly. The pressure is on.

There’s also another reason why the merger made headlines. Versace was one of the few independent companies left in fashion – a last bastion for autonomy in an industry quickly becoming controlled by private equity endorsements. When Dries Van Noten sold a majority stake in his company to the Spanish conglomerate Puig earlier this year the industry had little time for the business move to resonate, because Missoni quickly submitted to a government-backed private equity fund injection shortly after. The fact that the ultimate indie label and a family-run legacy brand had been forced to accept the financial help of investors was a major industry wake-up call. Is it becoming impossible to thrive as an independent creative today?

Stella McCartney presents an interesting case study in response. Earlier this year, she bought back the 50 per cent stake Kering (then Gucci Group) acquired in her company in 2001 and took back total control of her business. As one of the few female leaders in the industry, she told press in May: “It would be rude not to”. And indeed, as one of the few pioneers in sustainable fashion, not having to answer to a parent company driving profits over textile innovation may work out neatly. McCartney’s ambition is certainly to be celebrated but a founder buying back a sizeable stake in their own business is not a headline one often sees in this industry.

Giorgio Armani, Dolce & Gabbana and Salvatore Ferragamo are still flying the flag for family-run companies, and, in London, Erdem is a healthy example of a designer steadfast in his independency. But who knows which company Capri Holdings will have its eyes on next?

It will take time for the group's influence on Versace to become evident, but with the world watching to see whether Capri Holdings will become a success story or not – shares in Michael Kors fell by eight per cent when rumours of the deal started circulating the day prior to the announcement – it will mean business. Versace might just have the glitz to keep Capri Holdings looking like a shiny new proposition against the monoliths, but only if its "iconic and unmistakable style" – as described by Donatella herself – is not quietened.

Posted by FASHIONmode News at 5:26 PM