Tiffany & Co. is on a mission to flex its youth credentials. This year has already seen the American jewellery monolith recruit Elle Fanning and A$AP Ferg in a campaign that saw the latter remix "Moon River", and stage a guerrilla-style gig on the roof top of the company’s glossy New York flagship. Reader, there were Tiffany-blue traffic cones. With one stroke of marketing genius the iconic Breakfast at Tiffany’smoment that will forever be associated with the brand was given a fresh update and put back on the agenda.

Its latest move will perhaps garner less air time on Instagram, but is no less important. The brand has invested in seven emerging artists and put financial clout behind them. Each recipient of the Studiomakers Prize, which is part of its ongoing partnership with the Outset Contemporary Art Fund, will receive rent-free studio space for a year and have the opportunity to display their works in the Tiffany & Co. Covent Garden boutique as part of a three-week exhibition.

The art school graduates – James Fuller, Mark Corfield-Moore, Miriam Naeh, Neung Wi Kim, Roy Efrat, Sofia Mitsola and Yasmine Robinson – encompass a variety of mediums from print and textiles to sculpture and jewellery design. The winning pieces will find a home amongst the personalisation stations, video screens and vending machines selling perfume, which have all been installed in the new “concept store” to speak to a new generation. “It has a uniquely interactive and innovative design with the focus on self-expression, making it the perfect location in which to showcase artworks by London’s finest graduates,” Richard Moore, Tiffany & Co. divisional vice president of store design and creative visual merchandising, said in a statement. 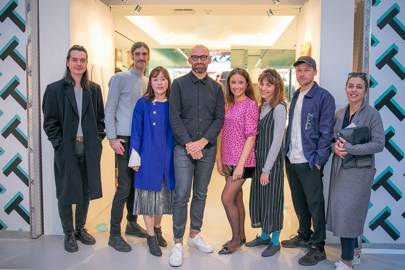 This might only be the second year the prize has been running, but art has long been a part of the brand narrative. Since its conception in 1837, it has supported the likes of Andy Warhol and Robert Rauschenberg and kept its finger on the cultural pulse as well as establishing itself as a global destination for diamonds.

“Tiffany & Co. is marked by its long-standing tradition of excellence in art and design,” Candida Gertler OBE, co-founder and chairperson of the Outset Contemporary Art Fund, shared. “ Exhibiting in the new store means that the artists will, at such an early stage in their career, be challenged to step up to this level of perfection and create an exhibition fit for the world stage.”

Posted by FASHIONmode News at 4:27 PM