Louise Gray On Her Return To London Fashion Week

I don’t know if I’d call it a comeback,” says Louise Gray, who is returning to London Fashion Week, five years after shuttering her fashion brand and walking away from the catwalk.

When the St Martins trained designer, suspended her vibrant label in 2013, it was only meant to be for a few seasons. She focused on teaching at St Martin’s (where she’s forged a reputation for talent spotting) and collaborations (with Topshop, Rottingdean Bazaar and Marques Almeida amongst others). Her brand may have been absent from the runway but her influence was felt throughout the industry. “I’ve been working all along,” she says but decided that now is the right time to return to front line fashion.

When Gray shuttered her brand she had a full order book and was fêted by the press as one of London’s leading creatives. But faced with the mounting costs of putting on a show, she chose to take a hiatus rather than saddle herself with impossible debts. Gray started her label as soon as she graduated and describes her young designer experience as like “being on a hamster’s wheel.” Reflecting on the difficult decision to close her brand she says, “You’re in a system where people help you and then it stops. There’s a ginormous jump to getting help and then having none. It’s hard to carry all of it.” Her decision reverberated through the industry and left many questioning the viability of the fashion show system and the pressure it puts on young designers who are trying to build sound businesses. 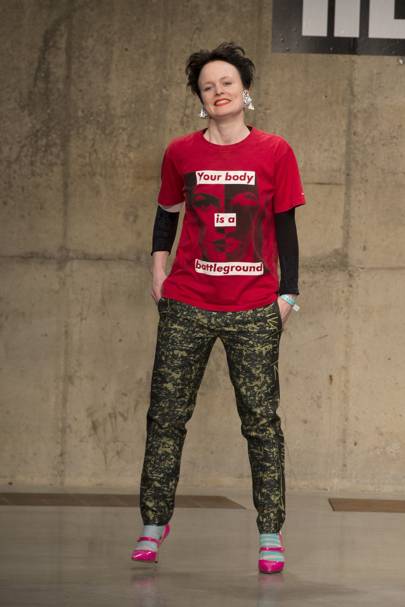 Fast-forward five years and Louise Gray is back, a little older, though no less colourful, vibrant or independently minded. She’s not changed a bit but the fashion system has. “It’s totally different now,” she says. Fragmented and disrupted, there’s now space between the cracks for a designer like Gray’s to flourish. “You can sell in a different way. I feel so free to do it the way I want to.”

She plans to sell her clothes through her own website, at wholesale and through the outlets of her many collaborators. She’s worked with Norton and Sons on their first ever women’s range, “You can have one of their suits made in my fabrics,” she says. There’s also an eyewear collaboration and shoes. Her print based aesthetic is “Still the same same,” but has evolved with her. “I’m a 36 year old woman. It’s about what’s good for me now and what I want now.”

In a bid to resist that hamster’s wheel experience, Gray is showing at a time and manner of her choosing. Deliberately off-schedule, she’s taking over an east end gallery on Saturday morning with live music and a diverse cast of friends, models “and women I’m obsessed with,” including an NHS nurse and several of her St Martins students. Gray is relishing the new freedom of the current fashion era. “I’m much more in control. I am a designer this is what I do. I’m not saying I’ll show every season. I’m going to do it the way I want to.”

Posted by FASHIONmode News at 4:39 PM