Stella McCartney Has Designed Her Own (Faux Leather!) Stan Smiths

Despite the current trend for clunky, thick-soled "dad trainers", nothing beats a pair of classic Adidas Stan Smiths. They're simple, they're streamlined, and they go with everything. More often than not, they're leather, which some would argue is environmentally-harmful. One such person is Stella McCartney. A lifelong vegetarian, she's designed her fair share of faux leather, knit, and even recycled plastic shoes for her Adidas x Stella McCartney line, which is now in its 13th year. It wasn't until she received a custom pair of Stan Smiths that the idea for her latest trainers crystallised.

"Many years ago, I was given a special pair of vegetarian leather Stan Smiths by my husband and Adidas," she tells Vogue. "It occurred to me that you really couldn't tell the difference between the real leather and the faux leather pair. I could not help but think [of] how many animals' lives could be saved if Stan Smith and Adidas would change from real leather to vegetarian leather, and use non-animal-based glues." She suggested a Stella McCartney x Stan Smith collaboration to Adidas, and the results are landing in stores on September 10. "We've been collaborating with Adidas for many years, [so] I thought this would be a great way to reach a really wide audience and enable them to understand that you don't have to have leather shoes or animal-based glues in order to have an incredible, iconic product," McCartney says. 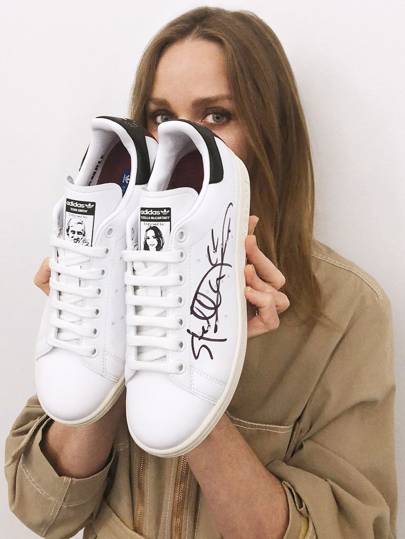 The "Stella Stan Smith" looks nearly identical to the classic pair you've seen everywhere, save for a few details: Instead of a Kelly-green heel, these are colour-blocked with burgundy and navy and stamped with McCartney's logo. The Adidas stripes down the side are replaced with tiny punched-out stars, a consistent motif in McCartney's accessories, and while Stan Smith's profile remains etched on the right tongue, the left one features the designer's portrait. Each pair retails for £235 and will be available for pre-order tomorrow at Stellamccartney.com.

Posted by FASHIONmode News at 6:55 PM