Tracee Ellis Ross Shut Down The Emmys In Valentino Couture

If the awards show red carpet is a sport, Tracee Ellis Ross is a professional marathoner. The actress never tires of a major fashion moment, delivering one impactful look after another – always distinctive, non-reductive and unabashedly glam. It's no surprise, then, that the actress proceeded to shut down the step and repeat at the 2018 Emmys last night in Los Angeles, this time choosing a powerful pink creation from Valentino Haute Couture. 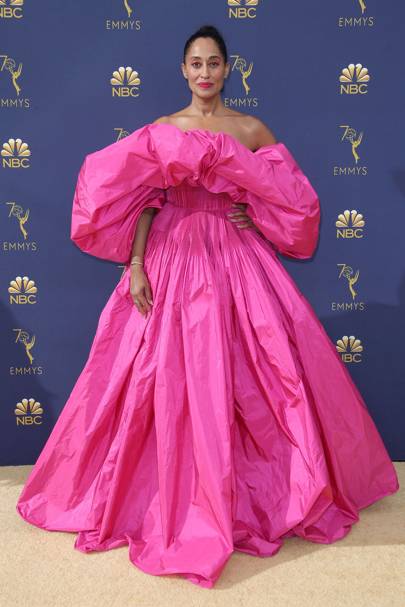 For the big soirée, Ross wore an off-the-shoulder gown designed by creative director Pierpaolo Piccioli that was both full-skirted and full-sleeved, ballooning out to form a voluminous silhouette that was dramatic and runway-worthy. To give it some much-needed shape, the dress was cinched at the waist, making for a more flattering fit. (Though the long hemline concealed her matching fuchsia Tamara Mellon shoes, there wasn't much need for any statement accessories here.) The style first made its appearance at Valentino's autumn/winter 2018 Couture show in Paris – though it assumed an energetic life of its own when slipped on by Ross.

Posted by FASHIONmode News at 5:08 PM