Mulberry's New London Store Is A Paean To The British Landscape

For retailers, glad tidings: the prophesied “retail apocalypse” appears to be stalling. Finance magi have long predicted digital clicks would soon render bricks and mortar extinct, but numerous brands have reported better-than-expected sales over the summer – and London has seen a wave of retailers, including Matchesfashion.com and The Shop At Bluebird, opening exciting new “omni-channel” spaces.

Add Mulberry to the list: its brand spanking new shop at 100 Regent Street opened today. The first store to be revamped under the eye of Johnny Coca, who joined the brand from Céline in 2015, it’s a study in moody blues, chock full with hand-tufted rugs, antique British ceramics, pebble-shaped mirrored cupboards and dramatic abstract paintings. Designed by the polymathic Faye Toogood, a glance round the store reveals chintz and kitsch is out and emerald tiling, panelled yellow resin and polished concrete is in – albeit with a serving of rich velvet to soften the juxtaposition.

“The store concept plays upon Mulberry’s heritage brand status by paying tribute to the raw power of the British landscape, with its rugged highlands, rolling fields, woodlands, and concrete tower blocks,” Toogood told Vogue. “We wanted to make all the internal fittings as flexible and adaptable as our British character, creating a modular design that can be tailored to individual locations without abandoning its essential spirit. It’s a painterly celebration of the national landscape, punctuated by menhir-like pillars that stand midway between the Neolithic age and mid-century brutalism.” 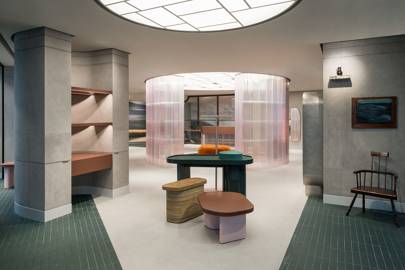 Creative director Johnny Coca told Vogue his decision to work with Toogood and her team at Studio Toogood was based largely on her intimate understanding of layers of British culture. “Faye is a leading creative force with a modern vision. She uses her creative intelligence to imagine the future, and her work combines a broad and eclectic knowledge of architecture, art, design and decoration,” he said.

Coca, leading the Vogue team down to the plaster pink-walled shoe enclave, with shoes displayed on remarkable slabs of marble, natural stone and rush benches, said he hopes customers will feel at home in the space - as well as enjoy the new exclusive colour ways of the hit Harlow bag. “I wanted the new Mulberry stores to be immersive environments with the feel of a home, a place to go and explore the modern British identity of the brand. Our stores are inspiring spaces that mix influences and references, they’re a place to rejoice, discover, learn and connect.”

Posted by FASHIONmode News at 4:38 PM