On Wednesday morning in Paris, John Galliano made a powerful statement at his Maison Margiela show, unveiling its new perfume Mutiny and a manifesto for a brave new generation.

Since he joined Maison Margiela three years ago, John Galliano has quietly and steadily been developing a new language for the house, drawing on its codes of anonymity and enigma. Today, he broke the silence in a co-ed spring/summer 2019 show that doubled as the launch of Mutiny – his first perfume for Maison Margiela – and verbalised the socio-political messages that have underpinned his every collection. "It started with the idea of mutiny. There were things that were happening around me in the world. There was a lot of unrest in Paris, and the women's march in America. It was the courage of standing up for what you believe in,” he said in a podcast about the fragrance released Wednesday morning, the third in the series The Memory of… with John Galliano, available on iTunes.

The title of these podcasts refers to one of the codes he's established at Maison Margiela, where garments can signify memories of other garments. Galliano illustrated that in Wednesday's collection, debuting a new technique in which he effectively cuts the motif of a jacket into a skirt, then styled it as a cape, and put it on a boy, who looked like a girl. No image could better demonstrate the nonconformist riot Galliano is staging in fashion, and beyond. "Everyone should be happy. Everyone should be who they want to be. It's your life. You shouldn't live someone else's life. And there are many who have lost so many years in their life because they can't be true to themselves, and it's not right. Everyone has the right to be who they want to be," Galliano said in a separate podcast about the collection. 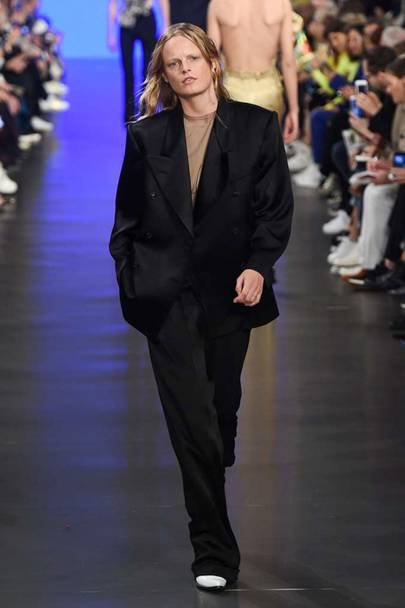 Specifically, he wanted to highlight the evolution currently surrounding the acceptance of non-conformist gender roles, an ethos reflected in his choice of mutinists, the ambassadors for the fragrance, who appeared in videos screened at the show, reflecting on their personal societal mutinies. They included Teddy Quinlivan, Sasha Lane, Willow Smith, Hanne Gaby Odiele, Princess Nokia and Molly Bair; all of whom have battled with society's norms and restrictions on gender and body identities. Compelled by the millennial and Z generations to which they belong, Galliano has been engaging in conversations with the stagieres, who intern with him at Maison Margiela, trying to understand the way they see the world. He rejoices in the self-expressionist freedom of a generation he in many ways helped pave the way for.

As the emerging designers of London will tell you time and again, Galliano's shows for his eponymous label and under Dior over the past decades served as their biggest inspiration growing up: theatres of social defiance, political provocation, and the kind of creativity that could only come from a person to whom creating is the same as breathing. “Conversation, energy levels, their fearlessness,” he said if his stagieres. “Their being who they really are, I find really inspiring because for so long I couldn't be who I wanted to be. So I have the greatest admiration." He talked about growing up in South London in the 1970s, and about finding a creative sanctuary from societal norms at Central Saint Martins where he could finally be himself. "It meant so much for me to be accepted, to have friends. I wasn't brave enough. So of course I was hiding things and wasn't really being true to myself or being authentic. It took me a long time. That's why now when I see such self-expression it's a joy for me and I positively encourage it. It's your life," he paused. "Who wrote that book, who wrote the rules? I wasn't involved with it."

These are the values Galliano has condensed into Mutiny, the powerful tuberose-based essence of which filled the Grand Palais on Wednesday morning like a thick cloud of glamour. Galliano uses the word "parfum" as a metaphor for the core of creation. In that sense, Mutiny isn't some marketing roll-out, but a distillation of all the things his Maison stands for: the old ideals of an haute couture house (to which fragrances like these were key) blended with the mutiny of a new generation. "When they come to a house they want to know what the house stands for - rightly so - before they buy into it," Galliano said of the new generations. "All I can say is that everything we do here is based in truth: authentic. It comes from the heart. Creativity is our mutiny. Creativity is my mutiny."

Posted by FASHIONmode News at 5:23 PM