When, in 1991, Carla Sozzani first opened her iconic store, 10 Corso Como in Milan, “there was no internet, there was no blogs, there was no Instagram… it was like a whole other world!” she exclaims. At the time, Sozzani was a legend in fashion magazines – she had been famously fired from Italian Elle after putting a dress by “foreign” designer Azzedine Alaïa on the cover – and her intention was simply to create a retail space that mirrored the creative narratives she had constructed in print. “Instead of having pages, we had shelves,” she explains – and, with that sentiment, she pioneered the idea of the all-encompassing concept store: one which might sell shoes and dresses, but also magazines, books and assorted lifestyle ephemera, as well as offering a communal space where “where people could come, meet, and exchange ideas”.

Decades down the line and, as she opens the enormous New York outpost of 10 Corso Como – a 28,000-square-foot space situated in Manhattan’s burgeoning South Street Seaport neighbourhood, her original idea may no longer feel quite so radical (her blueprint has been oft-imitated across the globe) – but it appears more important than ever. “Now, communication is so fast: everyone knows everything about everybody, and nobody talks to each other any more,” she reflects. “So places where you can get together and exchange your opinion and look into each other’s eyes instead of WhatsApp have become incredibly important.” 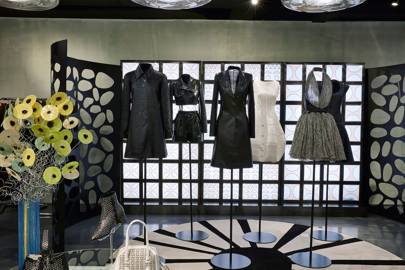 Accordingly, alongside an abundant luxury fashion offering immaculately curated by Sozzani, New York’s Corso Como features a particularly enormous restaurant – “the food and beverage is going to be important” – an art gallery, café and a garden, designed by Sozzani’s partner, American artist Kris Ruhs, responsible for each of the international Corso Como stores (now Seoul, Shanghai and Beijing each play host to the duo’s combined vision). Featuring everything from Prada handbags and Comme des Garçons clothing to Corso Como merch designed for the area’s tourists (“I hope they can leave with a memory,” Sozzani says), it is set to be a prime destination during New York Fashion Week, and beyond: a place where you might rifle through the rails and then settle down with a book, or for an IRL conversation.

“When people come, I hope they feel at home,” reflects Sozzani. “We’ve always wanted to give the feeling of: ‘Sit down and spend time with me.'” Whether you’re looking for a new handbag, some artfully-designed merch, or a fabulous fish course for lunch, if you’re in New York there are few places that can offer the lot with such compelling character. During an era of fast-fashion and even faster communication, the idea of sitting down and spending time somewhere so warmly-inviting certainly seems appealing.

Posted by FASHIONmode News at 2:18 PM