Pringle Celebrates SS19 By Reviving Its In-House Magazine, The Bulletin

On the opening day of London Fashion Week, Pringle of Scotland's London HQ, set off a leafy square in Westminster, is a hive of activity. As the team prepares for the brand's spring/summer 2019presentation and finishing touches are applied to their latest collection of summer knits, an unassuming pile of pamphlets on a nearby table seems to be attracting the most inquisitive stares. With covers of pale blue and powdery pink, they are printed with sketches of Pringle's iconic Hawick mill, where many of its garments have been produced since the brand's inception, and emblazoned with the title "Pringle bulletin". These are some of the original copies of The Bulletin, Pringle's in-house magazine, first launched in March 1949 to publish company news, pass on messages from the chairman and report on the marriages and births of its employees. "It started out as a monthly publication," explains design director Fran Stringer. "In the '70s it became quarterly and eventually the company stopped producing them all together. But this season, we've decided to bring it back."

Stringer's relaunch of the magazine, which coincides with the release of Pringle's new collection, will celebrate the brand's friends and family just as the original publication had, albeit with a modern twist. In the place of '50s fashion show reports and adverts featuring Hollywood starlets in twinsets, there is a shoot with model of the moment Lili Sumner and an interview with Pringle's longtime head of knitwear Allan Godfrey. There are also lush photographs of the Scottish Highlands by frequent Pringle collaborator Harley Weir, whose landscape shots were previously printed onto celluloid knits for the brand's spring/summer 2018 collection. A spread by Oliver Hadlee Pearch entitled The Best Of British honours homegrown talent across a range of creative fields, with portraits of everyone from actress Vicky McClure and artist John Booth to singer-songwriter Ama Lou and Royal Ballet principal dancer Matthew Ball. Meanwhile, the latest collection, also photographed by Weir, is presented in a series of romantic images shot against the crumbling backdrop of Blackness Castle near Edinburgh.

"We wanted all the pictures to feel really personal," adds Stringer. "Everyone in this issue is a big part of the brand. We wanted to make something substantial, something tangible and quite similar to what we'd done all those years ago, but also look ahead to the future." But after a prolonged hiatus, why did now feel like the right time to revive The Bulletin?

"Pringle has so much history," replies Stringer. "We made twinsets for the Queen and golfing gear for Nick Faldo, but there are so many stories that our younger customers might not know or might not associate with us. We wanted to take a look back and bring those stories to the forefront." To that end, the magazine is interspersed with brief inserts from early issues of the publication. One features a pale pink Pringle twinset on the cover of Vogue in 1955, while another recounts a royal visit by Princess Margaret in 1952. There is even a note sent to the company from Clarence House on behalf of the dresser to the Queen Mother that simply reads, "new cardigan please".

References to the more recent past can also be found in Julie Greve's dreamy shoot How Green Was My Valley, in which four barefoot models traverse the Welsh countryside wearing cashmere jumpers and beaded cardigans taken from the Pringle archives of the '70s and '80s. These louche knits, with their muted colour palette and oversized silhouettes, formed the starting point for Stringer when it came to designing the brand's spring/summer 2019 collection. "I absolutely loved these pieces," she says, referring to the shoot as well as the expansive moodboard of vintage Pringle looks hung up in her office. "So we took elements from this and reinterpreted them for today." 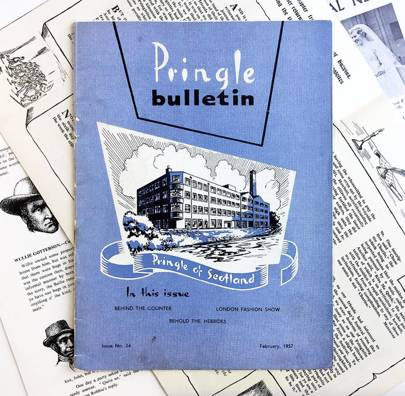 In the new collection, a hypnotic floral print from a jumper made in the '70s is printed onto sleek ribbed tops and cropped sweaters made from soft Scottish lambswool. There are wispy pleated skirts, colour-clashing twinsets, checked coats and intarsia knits with patch-worked florals and clashing argyle. "We have to convince our customers that knitwear can be for the spring/summer season," adds Stringer. "So we've used the lightest materials to make pieces that are quite delicate."

The collection and the magazine are both love letters to Pringle's heritage, which Stringer is eager to preserve. "Our Hawick factory is on a riverbank and when there was a flood in the '80s it damaged part of the clothing archives," she laments. "We had to repair all of the pieces and have them cleaned. Some were lost so I'm always on the lookout for archive pieces. Recently I was in a charity shop in Fulham and I found an old Pringle twinset with beaded embroidery. I had to buy it! The flood even destroyed some of our original preserved copies of The Bulletin."

The surviving issues of the magazine will be on display as part of an exclusive exhibition alongside the preview of the new collection at London Fashion Week. Although Stringer originally envisioned the new issue of The Bulletinas a one-off project, she admits she is having second thoughts. "It's quite a big undertaking but seeing all the magazines together makes me want to create more. I'm starting to think that maybe it's something we could produce annually."

Beyond paying tribute to the brand, Stringer says her goal with The Bulletinis to celebrate the people who have been at the heart of it for the past few decades. Her favourite shoot in the new issue, entitled Made In Scotland, is a photo essay by William Scarborough that depicts the craftsmen and women who work in the Hawick factory. It shows them knitting diligently under harsh strip lighting or hunched over sewing machines beside a random assortment of mugs and peeling posters of George Michael. "When we go to visit Hawick, we look around and realise that it probably hasn't changed in 100 years. Allan Godfrey, our head of knitwear, really epitomises Pringle's legacy. He's been working for the company since he was 16 and he never left. At one point his whole family was employed by the factory, including his dad who'd been here for 50 years. When I'm looking for inspiration I don't have to look beyond this," she adds, gesturing at the magazines both old and new on the table before her. "Maybe one day I'll run out, but we still have 200 years of heritage to work through."