Tory Burch has apologised after her brand faced accusations this week of cultural appropriation regarding an ad starring Poppy Delevingne.

The campaign video, titled Tory Story: An American Road Trip, advertising the brand's spring/summer 2017 collection was directed by Giovanna Battaglia Engelbert and features Delevingne, alongside two other models, dancing to Zay Hilfigerrr & Zayion McCall's Juju On That Beat. Since its release on Tuesday it has drawn some criticism on social media for using only white models when the song and viral dance were created by black artists.

“The video was intended to celebrate music that we love with our spring collection," Burch told us in a statement this morning. "It was never meant to be insensitive in any way. We have removed the video from our channels. I personally feel very badly if this hurt anyone and I am truly sorry." 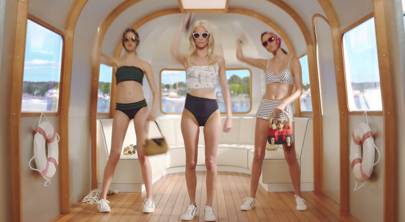 The video was posted on Elle Malaysia earlier this week accompanied by an interview with Battaglia Engelbert and Delevingne. However, the publication has since updated the story saying that the brand has requested for the video to be removed from all channels.

In the interview, the director revealed the reason behind her song choice, saying: "I wanted the video to be playful and as chic as possible and to put you in a very good mood. Juju On That Beat is a happy song; I like the fact that it is a very easy song, too. The girls learned the moves very quickly and they had fun. The best part was watching them rehearsing and doing the song because they enjoyed themselves for real, which made this whole process very fun."

Neither Battaglia Engelbert or Delevingne have alluded to the situation on social media.

Posted by FASHIONmode News at 12:13 PM