Givenchy has announced Clare Waight Keller as its new artistic director, effective from May 2. Waight Keller, who departed her creative director position role at Chloé earlier this month, replaces Riccardo Tisci who announced his departure in January.

The brand announced the news this afternoon on its Instagram account accompanied by an image of Waight Keller shot by Steven Meisel, prior to which it posted a quote which read: “True elegance comes with a natural gesture, an attitude in simplicity”, as well as an image of the brand's founder, Hubert de Givenchy. In her new role, Waight Keller will be responsible for the house's women's and men's ready-to-wear and accessories collections, as well as haute couture.

"Hubert de Givenchy's confident style has always been an inspiration and I am very grateful for the opportunity to be a part of this legendary house’s history," said Waight Keller today. "I look forward to working with the teams and writing a new chapter in this beautiful story."

Waight Keller is the second high-profile female hire for the LVMH group in the last year, following the appointment of Maria Grazia Chiuri at Dior. Today, the conglomerate's chairman and CEO, Bernard Arnault, revealed that he is very happy that she has joined the ranks.

"I believe her widespread expertise and vision will allow Givenchy to enter the next phase of its unique path," he said. "I am very much looking forward to her contribution to the maison’s continued success." 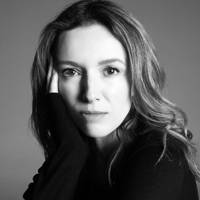 His sentiments were echoed by Philippe Fortunato, CEO of Givenchy, who said: "The teams join me in warmly welcoming Clare Waight Keller into the Givenchy family. I am very excited to see Clare bring her singular sense of elegance and modernity to Givenchy. By exploring our Maison’s 65-year heritage and the outstanding savoir-faire of its ateliers, I am convinced Clare will help Givenchy reach its full potential."

Speculation has been rife as to who would take up the reins at the house founded in 1952, with Off/White's Virgil Abloh the favourite to have been tapped for the role. Rumour also had it that Waight Keller would return to her native England, rather than take up a role at another French fashion house.

The industry will be eager to see the vision that Waight Keller, who is known for her feminine bohemian-inspired designs, materialises at Givenchy, a brand that Tisci took in an edgy and darkly romantic direction during his 12-year tenure. Tisci, meanwhile, is mooted for a role at Versace, alongside Donatella Versace, although nothing has been confirmed at this point.

Posted by FASHIONmode News at 7:20 PM