Coachella has launched legal proceedings against Urban Outfitters for allegedly trying to capitalise on the fame of the music festival by selling branded items of clothing bearing the event's name.

The festival claims that by the American high-street store selling items called the “Coachella Boot", “Coachella Mini Dress", “Coachella Pocket Tank” and “Coachella Valley Tunic” through its in-house brand, Free People, it is “trading on the goodwill and fame” of the annual music extravaganza's trademarks to make a profit, reports WWD. It also claims that Urban Outfitters' "unauthorised apparel" is illegally infringing on legally sponsored items sold by H&M and Pandora AS (both of which have official deals with the festival) and is causing confusion for consumers struggling to differentiate between authorised and unauthorised products. 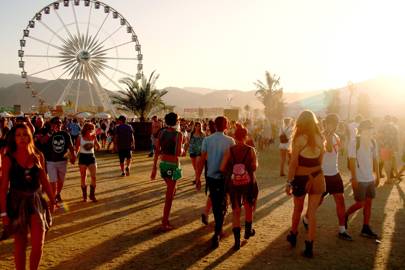 Coachella states in the filed lawsuit that the chain "ignored Plaintiff’s demands to cease their unlawful conduct", and in turn has left them with no choice but to pursue legal proceedings to “protect the famous Coachella marks and to protect the public". It is asking that Urban Outfitters "remove from sale any infringing items" as well as issue "corrective advertising" to inform consumers that the festival is not affiliated with the store or the label.

The countdown is on to this year's festival, which takes place over two weekends in April, with Lady Gaga filling Beyoncé's slot after the Lemonade singer - who is pregnant with twins - pulled out of her headline appearance after taking "advice from doctors". Radiohead and Kendrick Lamar are also confirmed to be performing at the festival. Urban Outfitters has been contacted for comment this morning.

Posted by FASHIONmode News at 10:32 AM