Valentino: Praise For Piccioli But No IPO

Valentino CEO Stefano Sassi has heaped praise on creative director Pierpaolo Piccioli, but has ruled out an IPO this year, reports WWD, due to "market conditions".

“An IPO in 2017 is not on the table and we’ll see what happens in 2018,” said Sassi. “We’ve shelved it because of market conditions. If things change, we’ll review the project. We are not talking about it internally at the moment.”

Far from the decision being a negative, however, the executive said that Mayhoola Group - which acquired a major stake in the brand in 2012 - is not looking to offload the label and instead "wants to keep it, with ambitious plans to do even more." 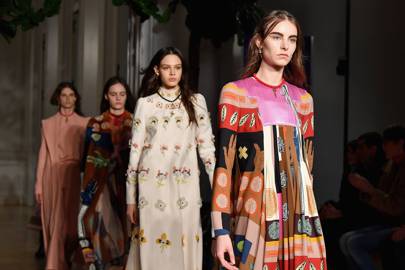 Also on a positive note, the CEO revealed that Piccioli is surpassing the brand's expectations as sole creative director, following his co-designer of 25 years, Maria Grazia Chiuri, departing for Dior last year. Sassi expressed “great satisfaction" at the solo shows the designer has presented so far, which he said proved "Pierpaolo’s very strong creative leadership and the correct stylistic statement - that of an evolving Valentino.”

Posted by FASHIONmode News at 10:58 AM