As fashion challenges go, Clare Waight Keller’s at Chloé was up there. At her debut collection, for spring/summer 2012, all the talk was of the need to recapture the magic of the Phoebe Philo and the Karl Lagerfeld years. She seemed well-placed to do so, as a young Englishwoman following in the footsteps of three young Englishwomen (Stella McCartney, Phoebe Philo and Hannah MacGibbon), with stints at Calvin Klein, Gucci under Tom Ford, and Pringle under her belt. The first mission seemed to be continuing to steer the brand on a softly romantic course without succumbing to the attention-grabbing, social-media-fuelled stunts which other brands were pulling as social media took hold.

Her debut was promising: Waight Keller invested the “fluidity and freedom” of the typically louche Chloé silhouette with a “boyish” nonchalance. Instantly recognising the need to get to grips with the Chloé flou – the French term for floaty, lightweight fabrics – she played with volume via crêpe de chine, sending out knife-pleat dresses and skirts that felt suitably effortless and wearable. The reviews were favourable.

Wearability became a buzzword for Waight Keller during her six-year tenure, but never at the expense of prettiness. A mother-of-three, including twin girls, she had relocated to Paris with her husband, the architect Philip Keller, and set about establishing herself as the authority on what professional, working women want to wear. Her hits variously included honing what she called the “barefoot trousers”, a louche cut to be worn with flats; rebooting the Seventies cheesecloth dress; creating blouses so lustworthy and feminine they persuaded women to part with over £1,000 for them; introducing the Nineties tracksuit to the Parisienne; and overseeing the launch of a string of hit bags, most recently the Drew and the Faye, both practical shoulder bags with a hint of Seventies charm. 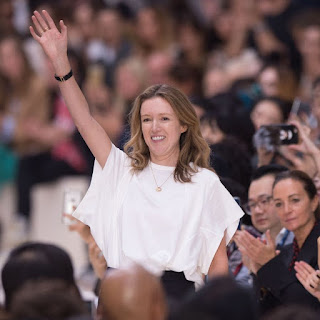 In her latest collection, for spring/summer 2017 and now her penultimate for the brand, it was the Seventies wallpaper florals that got fashion editors talking. They’ll sell, but it’s the bags and the shoes – a slim heeled, strappy sandal and the Faye backpack – that will be the big business. Chloé is owned by Richemont, and under Waight Keller’s creative leadership has become the conglomerate’s most profitable fashion label, with sales estimated at around €400 million.

Waight Keller relocated to England in June last year, mainly for family reasons, and has commuted to Paris on a weekly basis ever since, spending weekends at her bolthole in Cornwall. I interviewed her at Port Eliot Festival in July, where she talked at length, her son sat in her lap, about her constant preoccupation with exploring the tension between femininity and boyishness at Chloé.

“The house is 80 per cent women and we think a lot about who the Chloé girl is,” she said. “It was founded by an Egpytian woman who was a real force, a real spirit. She had so much drive and passion, she really believed in women feeling empowered by the way they dress but also feeling very free. Gaby [Aghion, the founder] went through so many changes and she felt that Chloé echoed that. She wanted women to feel wonderful in her clothes.” Natacha Ramsay Levi, who is rumoured to be taking on the Chloé mantle, will do well to remember that.

Here, we look back on six years of Chloé looks.

For autumn/winter 2013 Waight Keller was thinking about girls emerging from their school uniform, and the blouses - a house signature - accordingly had a grown-up elegance translated via dotted tulle. In this shoot, styled by Bay Garnett and photographed by Venetia Scott for the October 2013 issue, model Georgia May Jagger channeled a winsome heroine of Victorian literature, embracing a free-spirited romanticism.

Girlishness was guaranteed in Chloé's autumn/winter 2013 collection, where ruffled British pinafores took on a Parisienne hauteur. Stylist Joe McKenna further played down the pinafore's sweet connotations by pairing the white crêpe version with a mannish striped shirt, in a shoot with Jean Campbell in Montauk, Long Island, photographed by Bruce Weber for the October 2013 issue.

Chloé's shorts are consistent best-sellers: for spring/summer 2014, Waight Keller reworked the house obsession with tight accordian pleats in white leather, cotton and silk - all separates that lent themselves to Kate Phelan's sportswear-themed shoot, for the March 2014 issue, photographed by Alasdair McLellan.

A fluid silhouette has always been a priority at Chloé, and Waight Keller's come with what she calls "barefoot attitude" - floppy enough to wear with flats, relaxed enough to still communicate that Chloé loucheness. For Resort 2014 she further honed her laid-back silhouette, worn by Sasha Pivovarova in a shoot styled by Kate Phelan, and photographed by Daniel Jackson, for the July 2014 Ageless style issue.

The floaty dress
The spring/summer 2015 Chloé collection was packed full with cheesecloth, crochet, and crêpe georgette dresses that spoke of summer. "I wanted that one amazing shape that just hung off thin spaghetti straps," said Waight Keller, who redefined the boho dress with a stand-out collection. Where better to showcase the crochet iteration than in Hawaii, in the company of pro surfer John John Florence? Styled by Clare Richardson, photographed by Josh Olins, for the April 2015 issue.

Chloé's sport-luxe pieces ushered in a new mood of downtown effortlessness. The green satin souvenir jacket from the resort 2016 collection was one of the most coveted of the season - photographed by Daniel Jackson and styled by Kate Phelan for the December 2015 issue.

Chloé's spring/summer 2016 red tracksuit almost single-handedly ushered in the athleisure trend - but it was most seductive when the tracksuit trouser was paired with a poetic, off-the-shoulder, lace-trimmed blouse that harked back to the brand's famous flou. Stylist Jane How invigorated the combination with vintage boots for 'Earth Angel', photographed by Harley Weir for the May 2016 issue.

Chloé's denim is a non-mover in the wardrobes of the most stylish, and the lightly frayed white jeans were a favourite with the Vogue team for summer. Anna Ewers proved their charms show no sign of waning, in 'Classic Sequence', styled by Verity Parker and photographed by Lachlan Bailey in the May 2016 issue.

Anne-France Dautheville - the first woman to motorbike solo around the world in 1973 - was Waight Keller's muse for the autumn/winter 2016 show. The head-to-toe Motocross jumpsuit inspired by the pioneering rider heralded a new, tough stance for Chloé: daring, gritty, it exuded a daredevil allure in Kate Phelan's shoot with Alasdair McLellan in the September 2016 issue, set in the open roads of the Highlands.

Posted by FASHIONmode News at 10:34 AM