Natalie Massenet has announced that she is joining Farfetch as non-executive co-chairman this afternoon. The fashion industry has been speculating about Massenet's next move for some time in the wake of her exit from Net-a-Porter, which she founded in 2000, following its merger with Yoox. Ever the digital pioneer, she made the announcement today via her Instagram account.

"Over the past 18 months my entrepreneurial drive, and passion for how innovation in technology can transform the future of luxury remains undiminished," she wrote. "In 1999 when I first thought about selling fashion online, the world was just waking up to the possibility. Today we expect access to everything, anytime, anywhere. The tech and logistics platforms that power the best ecommerce today have new decentralised business models. If I were starting an ecommerce company today, I would do it very differently."

Her role at Farfetch will see her work alongside executive co-chairman, founder and CEO José Neves, who she called "the best of our entrepreneurs; a brilliant mind, a visionary leader and a gentleman". The pair have experience of working alongside each other at the British Fashion Council, of which Massenet is chairman and Neves an executive.

"I have been a fan since he founded Farfetch in 2008, admiring how José and his team have forged their own path in luxury e-commerce. Farfetch aggregates the most beautiful fashion curated by the world’s best boutiques and designer stores with the widest selection of styles into one easy-to-shop and brilliantly conceived API-enabled platform. A simple idea that is staggeringly difficult to execute that Farfetch has cracked!!" 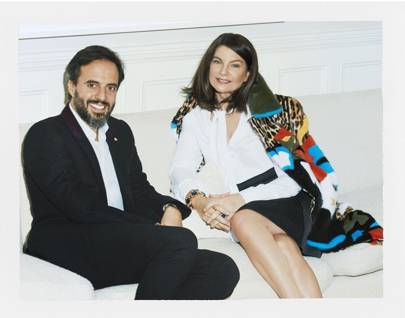 "I have, since Net-A-Porter launched, been a huge admirer of Natalie, she really is the undisputed pioneer, paving the way for the rest of us by demonstrating that not only could luxury be sold online but also that the internet would eventually become the primary way consumers engage with brands, globally," said Neves today.

"It’s no coincidence that all the most successful companies - Facebook, Amazon and Apple - are also API-enabled platforms," continued Massenet. "Farfetch is an example of the 'collaborative economy' when businesses historically seen as competitors work together to offer the best possible customer experience and support the world’s luxury fashion brands. It is a truly global business (over 750 designers and boutiques partners delivering to 190 countries, same day delivery in nine cities, translated into nine languages) and growing fast. Over the last year trading has grown by 70 per cent, with the most recent investment valuing the company at over $1 billion. In my new non-exec role, I look forward to further realising Farfetch's potential, developing its global brand and strengthening its fashion industry partnerships."

Posted by FASHIONmode News at 2:50 PM