As mother to three of the most successful models of the moment, Yolanda Hadid is well placed to share her wisdom when it comes to nurturing catwalk talent - and it appears American cable channel Lifetime thinks so too. The network confirmed yesterday that it has offered Hadid the lead in a new unscripted reality-TV show, tentatively called Model Moms.

The series will follow the mother of Gigi, Bella and Anwar, as she coaches aspiring teen models "to succeed on and off the catwalk" alongside a team of experts, reports Entertainment Tonight. Hadid will be mentoring the wannabe-models and their "momagers" through an eight-week training programme, which will focus "on the physical, mental and emotional wellness that it takes to build a brand". 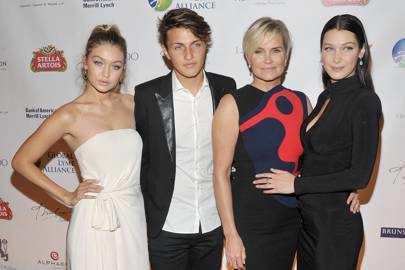 Whoever emerges as the winner of the series, will be awarded a $5,000 weekly prize which is aimed to help them when they embark on their careers, a management contract with Hadid's company, and the chance to be repped by industry stalwart IMG - the agency which looks after the careers and contracts of Hadid's three children.

While this is the first time that Hadid will take the lead in a television show, she has plenty of experience of being in front of the cameras from her time on Real Housewives of Beverly Hills. As for her credentials as a model coach, the sustained success of her children's careers is more than testament.

Posted by FASHIONmode News at 10:45 AM