Just over a week after Karl Lagerfeld was notably absent from his Chanel couture spring/summer 2019 show due to illness, the designer has made fashion headlines again. This time, the news relates to his eponymous brand. Lagerfeld has asked Carine Roitfeld to become a collaborator of the house.

To kick off the partnership, the duo will unveil “The Edit by Carine Roitfeld” in September. The line will comprise “essential pieces” selected from the designer’s autumn/winter 2019 collection that have a "mix-and-match appeal". “[Roitfeld] knows what she wants; she has a vision and she states her vision,” Lagerfeld said in a statement announcing the news. “She is actually what she seems to be; she matches her image, she fits in her universe, and she is a perfect match for KL.” 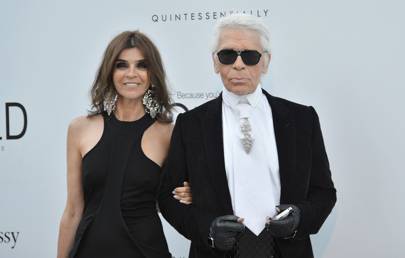 The feeling is mutual. “[Lagerfeld] is one of the smartest, most inventive and innovative people I have ever known,” the fashion editor added. “After all these years, Karl never calls me Carine – always Madame Roitfeld.” The duo have teamed up on a series of styling and image-led projects over the years, including a style tome entitled The Little Black Jacket: Chanel’s Classic Revisited in 2012.

The tie-up will evolve with additional projects to be announced later in 2019, as the house reinforced the sentiment that Roitfeld will be an “integral contributor to the Karl Lagerfeld brand.” Moving away from the transient nature of his previous brand partnerships with the likes of Kaia Gerber and H&M, Lagerfeld seems to be making motions to ensure a collaborative future with those he trusts for his namesake company.

Posted by FASHIONmode News at 7:28 PM