Bottega Veneta's New Campaign Might Be This Season's Best Yet

As fashion houses across the world prepare to fill their rails with new-season wares, a flurry of campaigns contextualising their clothes are suddenly being released into the world. But, if anything has become clear amidst the frenzied pace of modern media consumption, it is that standout moments are as arresting as ever – and, if my Instagram was anything to go by last night – that good campaigns hold weight. As I sat on my sofa, half-watching Netflix, half-scrolling through stories, I saw the same pictures repeatedly resurface. In spite of the abundant competition he’s facing for our attention, by presenting a vision of fabulous serenity, Daniel Lee’s debut campaign for Bottega Veneta appears to be making waves.

What is particularly interesting about Lee is that the 32-year-old Brit is himself a millennial – so his understanding of modern luxury is embedded in his vision for a brand that, until now, has been something of a sleeping giant. The first glimpse at his distinctly contemporary aesthetic arrived in November through a series of portraits captured by Thomas Lohr: an elevated reality, hardly retouched, starring the likes of the legendary Malgosia Bela and newcomer Veronika Kunz (while Lee didn’t design the collection they wore, he stripped them back to basics: cotton tank tops and khaki T-shirts). Then, in December, arrived his inaugural collection: a vision of luxury refracted through the off-kilter perspective he presumably mastered working under Phoebe Philo at Céline (he was the head of womenswear design). Perfectly formed tailoring; comically oversized handbags; an undercurrent of almost fetishistic sensuality (perhaps a happy byproduct of that leather heritage): it had all the insouciant hallmarks of the sort of womenswear that is magnetic to Philophiles, and it was great. 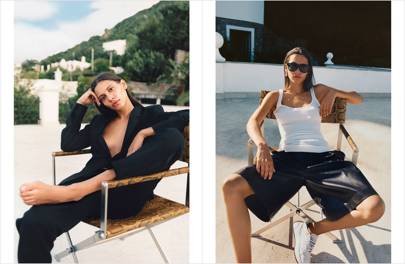 Now, with the launch of his first official campaign, he is consolidating that message by transporting it into aspirational lifestyle terrain. Photographed by Tyrone Lebon, a series of models are pictured lounging around the island of Ischia, sitting atop snakeskin directors' chairs (as desirable as the handbags) and posing nude in the sunlight (except for shoes, which are available to purchase). “Incidental, almost, the clothes and accessories become part of a whole – part of the context, part of a life,” declares the press release.

It’s that holistic vision, the idea of selling an aspirational existence rather than a product, which appears so compelling – and so in tune with consumers who prefer to proclaim affinity with a brand’s values than to its leather goods. There’s something that can feel louche about simply lusting after handbags, or posting product shots on your feed – but who doesn’t want to buy into the world of Saskia De Brauw dressed in nothing other than a black leather trench in front of a Neapolitan sunset? Who doesn’t think that Kaya Wilkins wearing leather basketball shorts and a white tank top while manspreading on that brilliant snakeskin is a #mood? Lebon has essentially captured an artfully-configured, meticulously-styled series of holiday snaps: surely catnip for the Instagram generation.

“A palate cleanser, a reset of our perception, a reestablishing of identity for now,” the release continues. If this is the start of Bottega Veneta 2.0 – lo-fi glamour presented within the context of a highly aspirational lifestyle – we’re all in. If investing in De Brauw's calfskin coat gets me any closer to that Ischian villa, or that seductive confidence, I’ll be first in line.

Posted by FASHIONmode News at 7:16 PM