Who Is Virginie Viard, Karl Lagerfeld’s Successor At Chanel?

Not since Gabrielle “Coco” Chanel first introduced her iconic brand to the world in 1910 has another woman been at its helm – until now. After the news of the death of the brand’s artistic director Karl Lagerfeld broke on February 19, a statement soon followed confirming his successor: his long-standing right-hand woman Virginie Viard.

Viard – who stood in Lagerfeld's place at the Chanel Haute Couture spring/summer 2019 show in January because Lagerfeld was “feeling tired” – has been by his side for decades. She started as an intern at Chanel in 1987, and left Chanel with Lagerfeld to join Chloé in 1992, where the pair worked together for five years. When Lagerfeld returned to the French fashion house in 1997, she took on the role of coordinator for haute couture, and then ready-to-wear in 2000. 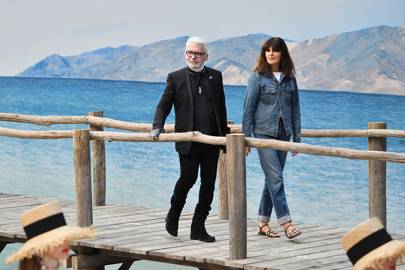 Working in fashion wasn’t always Viard's goal. Instead, she wanted to “make theatre costumes”, she told to French magazine Crash in 2011. “I started in costume production as an assistant to Dominique Borg, who notably produced costumes for Camille Claudel; then I was a costume designer for films and plays, until I met Karl, who suggested I work at Chanel and then Chloé.” She created the costumes for 1993 film Trois Couleurs: Bleu [Three Colours: Blue], with Juliette Binoche, and 1994 film Trois Couleurs: Blanc[Three Colours: White] while working with Karl at Chloé.

Tasked with continuing the creative work for the Chanel collections, “so that the legacy of Gabrielle Chanel and Karl Lagerfeld can live on", by Chanel chief executive officer Alain Wertheimer, Viard has been an integral part of the design process for many years now. “I make the collections come to life with the ateliers and the Métiers d’Art houses, based on Karl’s sketches,” Viard explained to The Telegraph in 2017. “I coordinate the teams, liaise with suppliers and choose fabrics. Then, of course, I do fittings with Karl. As soon as I receive his sketches, the process begins. I try to please him, but I like to surprise him too.”

Posted by FASHIONmode News at 10:00 AM