Anya Hindmarch's Chubby Hearts Are Back For Valentine's Day

Anya Hindmarch has issued another love letter to London via her chubby heart design project. If you missed its initiation last Valentine’s Day, the designer suspended and squashed giant red balloons above and inside the city’s landmarks to urge Londoners to look up and feel the love.

Glad tidings we bring, for the bulbous, joyful balloons are back! Hindmarch has installed a heart slap bang in the middle of Wellington Arch on Hyde Park Corner in time for the Hallmark holiday and London Fashion Week that follows. Why the comeback? “We have been overwhelmed with people asking us to run the campaign again from all over the world,” Hindmarch tells Vogue. “This time, it marks the beginning of an international chubby hearts project to spread the love from London to other cities later in the year.” 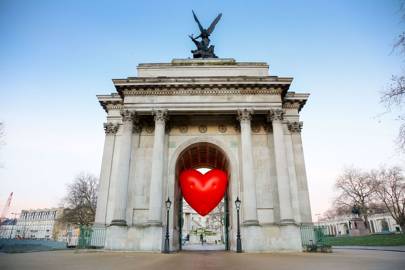 The decision to send the hearts up, up and away is one supported by Mayor of London, Sadiq Khan. “I’m delighted to see the chubby hearts return to the capital,” he adds. “It sends a clear signal around the world that London is open to creativity and talent, and always will be.” Quite literally, watch this space.

Posted by FASHIONmode News at 4:00 PM