Kapow! Brie Larson might have been out of the spotlight shooting her next string of films, but, this week, she came back with a bang on the promotional tour of Captain Marvel, the 21st film in the comic book franchise and the first with a female lead.

As the titular role, Larson had two options at the London premiere. Downplay the superhero connotations and opt for a classic red-carpet gown which would make an impact of its own accord – much like the Celine by Hedi Slimane design that she wore at the Oscars 2019. Or, get into character and commission a fantastical dress to acknowledge that it’s a kick-ass – albeit long overdue – moment to be celebrated. Larson chose the latter. 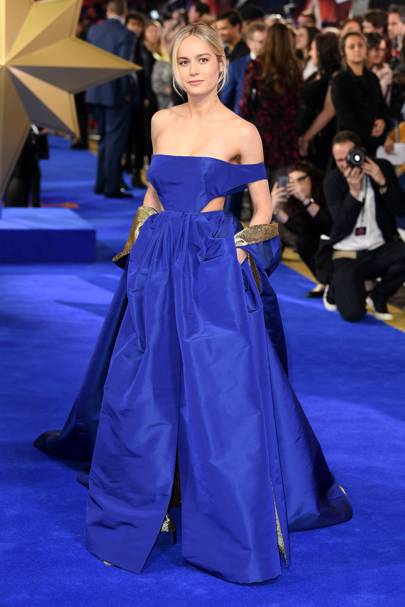 With the help of her stylist Samantha McMillen, the actor worked with Pierpaolo Piccioli to create a custom Valentino gown that used the accents of a superhero’s uniform as its blueprint. The rich royal blue gown with cascading cape feature that could be shrugged off the shoulders comprised cut-outs and flecks of gold, and fanned out into the same diameter as all Piccioli’s couture ball gowns (read: XL). Even McMillen marvelled at the creation. “I seriously have no words to express my awe and gratitude to Piccioli and his incredible couture team at Maison Valentino for creating this gown,” she wrote via Instagram.

Larson’s co-stars Gemma Chan and Lashana Lynch wore equally punchy red-carpet confections (a red Brandon Maxwell two-piece and a fuchsia slashed-thigh Michael Costello dress) to celebrate the blockbuster, which is set in the ’90s and acts as a backstory to the present-day happenings in the Marvel Cinematic Universe. Here’s hoping the casting paves the way for more Marvel female roles to take flight. There’s always room for more capes on the red carpet.

Posted by FASHIONmode News at 10:25 AM