Selfridges Pledges To Ban The Sale Of Exotic Skins By 2020

For over a decade, Selfridges has never wavered from its pledge to not sell fur. Now the British department store has added exotic skins to the list – with the goal of having phased out all products made of python, lizard, crocodile skin and python, and only selling leather from agricultural livestock by 2020.

“We are dedicated to being at the very forefront of future-thinking retail. For us, that’s a future where luxury is defined by craftsmanship and material innovation,” said Selfridges’ buying director Sebastian Manes. Just last month, Victoria Beckham announced that it would cease using exotic skinsin all future presentations as of its autumn/winter 2019 ready-to-wear presentation. The move followed on from the footsteps of Chanel, who vowed to halt the use of skins in its future creations in December 2018. The decision resulted from the brand consistently finding it difficult to source skins that met the house’s quality and ethical standards. A whole of host of brands – from Versace to Michael Kors – have also stopped using fur. 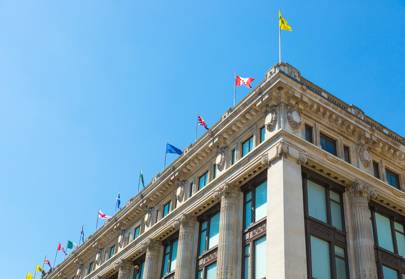 For Selfridges, though, this announcement is part of a larger strategy it is rolling out: Buying Better, Inspiring Change was launched in 2016 in a bid to ensure 50 per cent of its products are eco-friendly by 2022, keeping ethical and environmental considerations at the forefront. This move has only been furthered by its recent launch of Project Ocean, which has involved the store removing all single-use plastic bottles from its shelves since 2015, and all single-use carbonated drinks bottles since last year.

Since 2011, Selfridges’ Bright New Things initiative has also been spotlighting brilliant up-and-coming designers – with a specific focus on designers championing sustainability since 2016. “As a leading global retailer, Selfridges seeks to use its influence to encourage partners and people to buy responsibly, respect the planet and protect our future,” said Selfridges’ director of sustainability, Daniella Vega. This season, newcomers ELV Denim, Permanent Clothing, Elliss, Good News and Stay Wild have made the cut. From swimwear made from regenerated sea fishnets to denim fashioned from upcycled vintage jeans, all the designers are showcasing how stylish sustainable options can truly be.

Posted by FASHIONmode News at 10:22 AM