Virgil Abloh Discusses The “Keystone” Of His Louis Vuitton Vision

You’ve no doubt seen the memes about his red carpet harnesses, the ones that Michael B. Jordan and Timothée Chalamet have worn. How does a designer who’s making some of the most recognisable menswear of the moment do everyday clothes? That was Virgil Abloh’s task for his first pre-collection as Louis Vuitton’s men’s artistic director. “I see and understand the vitality of clothes that people actually wear,” Abloh said on a call from London. “The pre-collection was a safe haven to test out ideas, to start defining that palette.”

For the record, Abloh calls those harnesses “mid-layer garments,” and he’s included several of them in his first pre-fall offering for the house. But his real focus this season, he explained, was staples. Make that a capital S; Abloh is launching a standalone capsule collection called Staples Edition, which will include pieces like a camel-colour cashmere coat, a faded jean jacket, and a neatly tailored black suit - all of which, in one of the double entendres he’s so fond of, feature staple-shaped hardware. “It’s clothing that you wear and don’t think twice about,” he explained. “It’s letting the savoir faire and the quality be the main signifiers and reasons to purchase.” 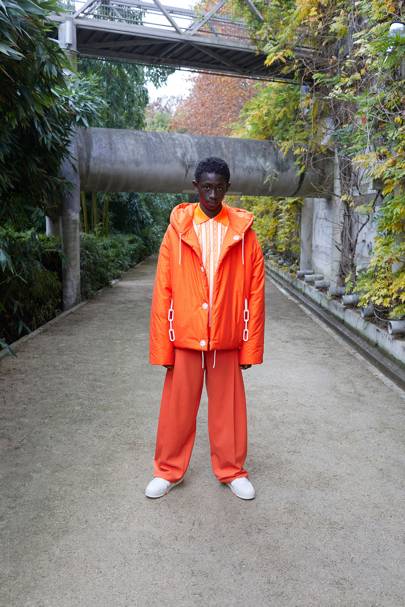 Of course, Abloh has legions of fans who have other reasons to purchase. Reviewing his Autumn/Winter 2019 collection for the brand last month, Vogue Runway’s Sarah Mower noted the ranks of teenage boys outside the Vuitton show, pleading for souvenirs. They might like the look of the Nascar-style jacket and other novel logo treatments on sweatshirts, fleeces, and tees. (Abloh does have a way with logos; buttons in the Staples range are sewed on with L- and V-shaped stitches. Clever.)

Back to that mid-layer garment. While nowhere near as recognisable as the LV logo, it’s quickly become a signifier of its own. Abloh calls it the “keystone” of his Louis Vuitton vision. “It was the actual very first thing I designed,” he said. “I wore it to the Met Gala. . . . It doesn’t have the comfort or the security of a jacket, but it’s somehow empowering.” We should expect to see many more of them.

Posted by FASHIONmode News at 8:50 AM