Kim Jones Is Announced As The Fashion Awards' Trailblazer

There’s no two ways about it: Kim Jones is the future of fashion. Fresh off the back of his groundbreaking pre-fall menswear collection, which was staged in Tokyo around a 39-foot fembot designed by Hajime Sorayama (very future), he is being awarded accordingly by the British Fashion Council. At tonight's Fashion Awards, in celebration not only of his recent rejuvenation of Dior menswear but the pioneering vision he has exhibited throughout his career, he is being bestowed with the event's inaugural Trailblazer Award – and never has such a title appeared so relevant.

“Kim is a trailblazer,” reflects Edward Enninful. “I’ve been delighted to watch him progress from creating his own brand in Noughties London to, in recent years, becoming a global force. What I love about Kim is that he never looks back or rests on his laurels: he’s brought so much to fashion and evolved from a cool, streetwear pioneer into the chic-est international designer – someone who caters to youth but exhibits a natural sophistication that appeals to all generations.” 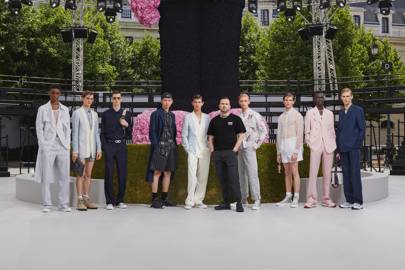 Jones can easily be credited with the fact that, in recent seasons, the fashion industry has shifted towards recognising streetwear as an integral part of its narrative – but his recent collections at Dior have seen him transform menswear anew. Not only has he taken the market’s penchant for collaboration one step further than the rest – by bringing Yoon of Ambush in house to design Dior’s menswear jewellery, and Matthew Williams of Alyx to design his seatbelt fastenings – but he has translated the house’s storied codes into elegant and contemporary sartorialism.

By imbuing his collections with the work of the couture ateliers, he has created a fresh new vision of couture menswear, one that is at once decidedly romantic and painfully cool. “Where I’ve been before has been quite street-y and I wanted to bring elegance back,” he said of his Dior debut in June – and, as his new award attests, where he goes, the rest are soon to follow. Under Jones' direction, menswear is about to undergo a makeover – and tonight's celebrations are certainly going to be well deserved.

Posted by FASHIONmode News at 9:59 AM