Calvin Klein is parting ways with its chief creative officer, Raf Simons, less than two years after the designer showed his first collection for the brand. Simons first joined the American label in August 2016, prior to which he held the role of creative director at Dior. His departure is effective immediately, and reportedly comes more than eight months before his contract was due to expire.

"Both parties have amicably decided to part ways after Calvin Klein Inc. decided on a new brand direction which differs from Simons’s creative vision," said parent company PVH in a statement. Consequently, the brand will not be showing on the February 2019 New York Fashion Week calendar.

The break-up will not come as a surprise to many. While Simons's tenure undoubtedly put Calvin Klein back at the forefront of fashion, infusing its Manhattanite minimalist sensibility with political edge in a series of shows which challenged the status quo and questioned what it means to be a boldfaced American brand in the Trump era, commercially it has failed to fly.

In November, on the back of disappointing third-quarter results, PVH CEO Emanuel Chirico criticised a "soft" performance. “The Calvin Klein brand continues to command strong brand health and desire in all markets. However, the business in the third quarter experienced softness. While many of the product categories performed well, we are disappointed by the lack of return on our investments (...) and believe that some of the Calvin Klein Jeans relaunched product was too elevated and did not sell through as well as we planned," he said, in a transcription of the post-earnings call posted on the company’s website. 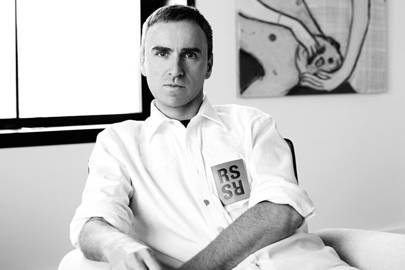 Simons's appointment in 2016, while hailed in the fashion press as an exciting industry development, was nevertheless an odd choice for a company as sprawling as Calvin Klein. In 2014, global retail sales of products sold under the Calvin Klein brands were approximately $8.1 billion. Insiders questioned how Simons, who has an immaculate high fashion CV, having turned out cerebral clothes at gilded houses such as Jil Sander and Dior, would cope with total control over the mass-market behemoth that at the time comprised Calvin Klein Collection, Calvin Klein Platinum, Calvin Klein, Calvin Klein Jeans, Calvin Klein Underwear and Calvin Klein Home brands - brands which he was charged with unifying under one creative vision. They also questioned his motives: after having left Dior, Simons gave a series of interviews lamenting the relentless pace of fashion.

His debut collection, in February 2017, was the talk of New York Fashion Week. British Vogue deputy editor Sarah Harris described the collection as "a celebration of America seen through an exacting eye and his precision cut." Christening the catwalk line "Calvin Klein 205W39NYC" Simons succeeded in bringing an arthouse allure to American favourites, such as band uniforms, varsity sweaters and easy tailoring. He invested his catwalk shows with a throb of electricity via industrial quantities of popcorn, for instance. And he single-handedly rebooted the cowboy boot.

Simons's spring/summer 2019 collection, which heavily referenced films such as The Graduate and Jaws, was presented at New York Fashion Week in September. Models wore mortarboards and the famous shark film poster was emblazoned with the “cK” logo and printed on tanks and tees. Now, that imagery seems prescient.

Posted by FASHIONmode News at 10:14 AM