Today, Givenchy opens the doors to its first London flagship in Mayfair. The timing couldn’t be more perfect, for 2018 has been the year that the brand has made its mark on the capital.

The British heritage of Clare Waight Keller, who took the helm in May 2017, earned the brand the most valuable fashion commission of the year: the wedding dress Meghan Markle wore to become the Duchess of Sussex. On May 19, 18 million people watched the former Suits star walk down the aisle in a graphic couture design that had been a close collaboration between designer and modern princess.

Their relationship has blossomed since. The Duchess has looked to Waight Keller for custom looks for Princess Eugenie’s wedding, the official family portrait for Prince Charles’s 70th birthday and her first official appearance with Queen Elizabeth II. A brand could not ask for better exposure, and profits – Alexander McQueen’s sales reportedly rose 27 per cent in 2011 after Sarah Burton created the Duchess of Cambridge’s wedding dress – must be healthy. 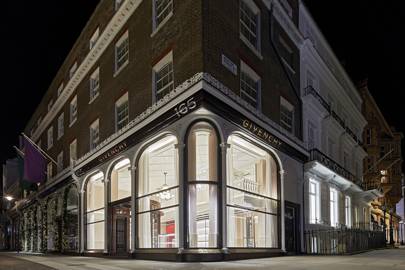 The new 165 New Bond Street store, which occupies two converted 18th-century buildings, certainly suggests this. The décor mixes period features, including bow windows and fireplaces, with a glossy red staircase, geometric tiles and pink podiums housing accessories. Speaking of which, a new mini bucket bag will go on sale exclusively in the store, and the brand promises more special one-off products to come.

Instagrammable changing rooms and limited-edition accessories will prove vital to attract millennial customers who are constantly on the hunt for newness that no one else has. But, will royal fans bite? The store's Mayfair location puts it in pole position to do well.

Posted by FASHIONmode News at 9:56 AM