Three Instagram pictures were all it took for Miley Cyrus to put a stop to the rumours surrounding her marriage to Liam Hemsworth. The couple, who have dated on and off for 10 years, were indeed wed at an intimate ceremony at Cyrus’s Tennessee property on the evening of December 23. The photographs that subsequently emerged on social media show the newlyweds embracing in front of a festively decorated fireplace.

In the third portrait, the singer tagged Vivienne Westwood, the creator of her off-the-shoulder silk gown. Hemsworth, who captioned his corresponding Instagram post “My love”, wore a black suit and trainers for the celebration. 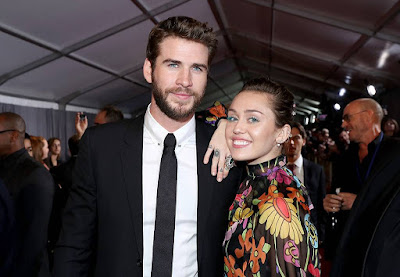 Reports of a wedding began circulating earlier this week, when the couple’s friend Conrad Jack Carr posted Instagram stories of Cyrus, clad in her Westwood dress, and Hemsworth, stood amongst Mr and Mrs balloons. Cyrus’s mother, Tish, and her sisters, Noah and Brandi, as well as Liam’s brothers, Chris and Luke, were also present as the duo cut a cake.


After meeting on the set of 2010 teen romance The Last Song, Hemsworth proposed to Cyrus in 2012. The couple called off their relationship a year later, but began seriously dating again around 2016.

Posted by FASHIONmode News at 9:42 AM