The Victoria's Secret Fashion Show Had Its Lowest Ratings Ever

The annual Victoria's Secret Fashion Show aired on December 2 and according to Entertainment Weekly, it garnered its lowest ratings ever. Clocking in at 3.3 million viewers for the 2018 show (compared to 5 million last year), the show's viewership has consistently dropped by millions each year since 2013.

Of course, there are many factors that could contribute to these failing numbers. For starters, the show switched networks from CBS to ABC and it aired on a Sunday night (in previous years, it aired on a Tuesday). Add to that, in recent weeks Victoria's Secret's CMO Ed Razek has been under fire for inflammatory comments he made about excluding transgender and plus-size models from the show. His statements led to several boycotts, at least one resignation, and widespread outrage, even from people like Halsey, who performed in the show.

The time between the show’s taping and airdate may have also contributed to the public’s loss of interest. For the month leading up to the airdate, extensive teasers from the show were released online, giving the whole world a look at the runway without the network's quick cuts and interview outtakes. 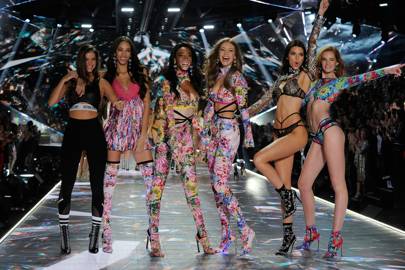 After the taping in November, attendees rushed to Instagram and Twitter to share every detail, and interested parties consumed content via their social media feeds like they would any other fashion show. The overly edited show that aired a month later as an "entertainment spectacular" felt like a relic of the past. In an essay critiquing the show's relevance, Washington Post fashion critic Robin Givhan wrote, "The executives at Victoria’s Secret may have found the perfect way to silence the many critics of its annual fashion show – by proving that it means absolutely nothing in the landscape of television entertainment."

But what will this mean for the future as Victoria's Secret heads into 2019 with a new CEO combatting negative backlash and calls for major change? Maybe the brand will finally see the writing on the wall. They’ll take a second look at what was once an exciting marketing moment, and has now become a damaging and dull hour of our already inundated lives. They’ll give the VS Fashion Show the overhaul it so desperately needs. Or, perhaps they'll just carry on as usual and watch the ratings drop even further next year.

Posted by FASHIONmode News at 9:37 AM