The Fashion Awards 2018 will celebrate 100 of the most talented trailblazers via a category entitled, New Wave: Creatives. To amp up anticipation before the December 10 ceremony, the British Fashion Council has been teasing out 20 names from the global community of young creatives at a time. In October, the list of individuals from China was released. The US portion followed in November. Now, the Brits are in, and leading the group is British Vogue cover girl Fran Summers.

"This year has been truly mind blowing, honestly," Summers tells Vogue about why 2018 has been a landmark year for her. "I’ve achieved four Vogue covers, and been taken under the wing of Edward Enninful, who is the most loving, hard-working, imaginative and truly progressive person I’ve had the honour to work with. I’ve been able to do what I’ve always dreamed of: to create art with talented teams, and I've loved every minute of it! This whole year has been filled with memorable and special moments, like shooting with my family and friends in my hometown. Not only this, but being able to see shifts in the industry, including working rights for models, having peoples’ voices being heard and seeing attitudes change. This year has had its ups and downs, but we’ve seen big changes in the industry, and I can’t wait for what’s to come." 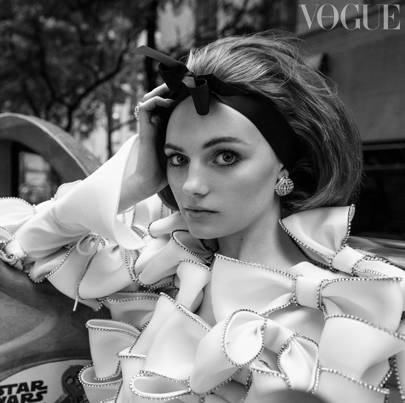 The launch of New Wave: Creatives was “to encourage an even younger generation to consider the many creative roles that make up the fashion industry and follow in their footsteps,” Caroline Rush, BFC chief executive, has said of the Fashion Awards sub-section. The diversity within the UK group alone is certainly enough to inspire. See the full list here, and tune into Vogue’s coverage on December 10 to see how the grand total of 100 are honoured at the Royal Albert Hall event.

Posted by FASHIONmode News at 9:49 AM