Joseph Returns To Form With A New Chapter Of Easy Elegance

In a world where women are starting, tentatively, to be paid their dues – where female CEOs are less of a radical proposition than they once were, and conversations are being had about pay equity – Joseph is a brand that ought to be inherently primed for success. After all, Joseph Ettedgui built his brand on the sort of easy elegance especially suited to low-key power dressing, designing a thinking-woman’s capsule wardrobe long before Phoebe Philo had so much as graduated Central Saint Martins, and its formative aesthetic appeals now more than ever. Sensible, then, that the brand’s new creative director Susana Clayton, has a picture of the man himself pinned up on her new-season moodboard: standing alongside a group of friends (including one of his protégées, Margaret Howell) they, dressed in every shade of beige imaginable, could easily be the campaign stars for the collection she is presenting.

“This image was really my starting point,” Clayton explains. “I want to understand what the Joseph of that time can mean today.” Simply translated that equates to a wealth of honey-hued knitwear and leather separates; plenty of great tailoring; and some particularly good dusty rose dresses cut from crushed silk. “I believe in Joseph’s principles, and I want to go back there – to the simplicity and the nonchalance, to making fashionable clothes but not being about fashion – instead really being about the woman, and the way that she would feel wearing them.” 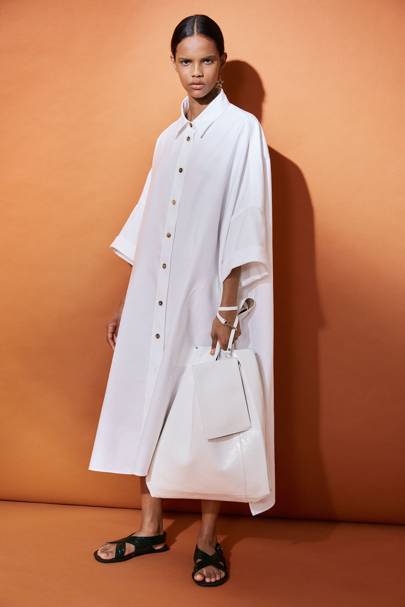 You can imagine women feeling completely composed in the deep navy ramie linen tunics styled over co-ordinating trousers, for example, or the bright white shirt dresses cut so wide they almost become capes. Equally, you can imagine settling into the endless knits that the brand has long been beloved for – from the chunky cashmere jumpers to clinging trousers imbued both with louche luxury and Nineties nostalgia. “The woman wearing this could be a lawyer, a stay at home mum… just someone who needs simple pieces that she can go to to look good, effortless and always chic – but without trying too hard,” grins Clayton. It’s that sort of appeal brands are currently clamouring for in droves but, through cleanly returning to bold minimalism, she appears to be setting herself in good stead.

The only print that appears throughout is an homage to Joseph: a vintage Moroccan stamp, printed on viscose shirting and robes and shorts (Clayton has reintroduced the brand’s early idea of head-to-toe separates designed to be mix and matched however you please). It is a sweet tribute to the founder’s remarkable story – as, to be honest, is this all. “Sometimes when I’m working, I find myself asking, ‘what would Joseph think of this?’” says Clayton. Seeing this on a rail, you can easily imagine he’d be proud.

Posted by FASHIONmode News at 9:34 AM