Streetwear Is Moving Beyond The Counterculture That First Defined It, So What’s Next?

The sway of influencers and the weight fashion brands put on them for marketing has been widely discussed within the industry, but now the streetwear community has declared the social-media stars who generate sales through likes its least likely source of fashion inspiration.

In the first Streetwear Impact Report, published by Hypebeast in collaboration with Strategy&, the majority (65 per cent) of the 40,096 streetwear enthusiasts surveyed suggested that musicians are the most credible figures in streetwear, because they “demonstrate cultural influence outside of social media”. Fifty-two per cent vouched for industry insiders, whereas only 32 per cent elected influencers. Half of consumer respondents said that they would stop buying a brand due to inappropriate behaviour by a label representative, and two thirds reported the importance of brand activism.

When outlining the factors underlining brand value, 81 per cent indicated product quality and design; 63 per cent said label legacy; 48 per cent reported the creative director as a key factor; and 31 per cent suggested social media. The top brands consumers believe are emblematic of streetwear, including Supreme, Nike and BAPE, have been creating streetwear for decades. The only anomaly is Off-White, which was born in 2012, but Hypebeast cites founder Virgil Abloh’s roots in music and fashion as boosting the company’s credentials.

The report defines streetwear not as a trend within fashion but as a component within a culture shift that spans fashion, art and music. “Simply put, streetwear is fashionable casual clothes: T-shirts, hoodies and sneakers,” the report states, but the countercultures it was born out of – such as skate, surf, hip-hop and graffiti – make streetwear an antidote to, rather than a part of, mainstream fashion. 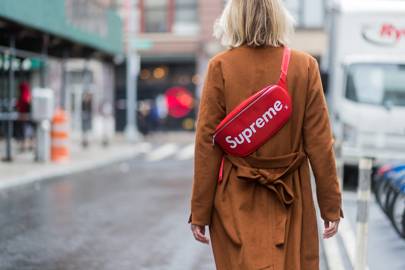 The anti-trend foundation of streetwear is backed by the fact two thirds of the consumers surveyed believe that a streetwear product will never go out of style. The group studied also reported spending five times more per month on streetwear than non-streetwear. This is, in part, because of the direct-to-consumer model that many streetwear labels adopt, where products can only be purchased directly from the brand during limited drops. Two thirds of industry respondents declared drops integral to the success of a brand due to the tight-knit relationship it builds with consumers, while half of streetwear shoppers said they would be more than willing to wait in line for a product release.

But as the wider fashion market tries to crack this cult-like formula, streetwear has become diluted. “In the early 1990s, we were all rooted in some sort of subculture,” Erik Brunetti, the designer of FUCT, told the New York Times in response to the study. “Versus brands today, they’re not really rooted in any sort of subculture. They just sort of appeared out of nowhere… It was a rebellion and now it’s become the opposite of rebellion. It’s become corporate, sanitised and pasteurised.”

Indeed, 70 per cent of today’s streetwear followers revealed they liked the category because it’s “cool”, but only 24 per cent believe in the community values behind the products. Breaking the statistics down regionally, 40 per cent of North American and European respondents (the demographics where streetwear originated) said that community had been key to their interest in streetwear, in comparison to 12 per cent of Asian respondents (the new market). Korean and Chinese consumers spent the most per month on streetwear, while Japanese customers reported the highest average spend per streetwear product.

On how streetwear will play out, Alexandre Arnault, CEO of Rimowa, who orchestrated the brand’s much-hyped collaboration with Supreme, highlighted the “danger” of luxury brands simply creating trainers and hoodies in an attempt to tap into market. “While I understand why many brands want to get access to streetwear, I feel like pure customers who like streetwear feel when it doesn’t feel right,” he said. Arnault praised Balenciaga and Louis Vuitton, under Nicolas Ghesquière, as luxury brands who have successfully segued streetwear into their offerings, but suggested other labels run the “risk of losing customers completely.” For streetwear to keep growing at the rate it has over the past five years, the market will have to continue to evolve. The concern for those at the heart of it is whether it will move further away from the core values that first defined it.

Posted by FASHIONmode News at 4:33 PM