Kering made headlines on April 15 when François-Henri Pinault, chairman and CEO of the luxury conglomerate that holds Gucci, Alexander McQueen and Balenciaga within its stable, pledged €100 million to the Notre-Dame restoration efforts. Now, French President Emmanuel Macron has called on Pinault to use his influence again.

Ahead of the G7 summit in Biarritz this August, the chief executive has been tasked with unifying a group of brands to set sustainability goals to reduce the industry’s negative impact on climate, biodiversity and the oceans. “We have to work collectively,” Pinault told the Copenhagen Fashion Summit this week. “It’s about a few leaders who will accept to put themselves in an uncomfortable situation to force themselves to move.”

“The mandate is really to move the sector,” added Marie-Claire Daveu, Kering's chief sustainability officer. “The G7 is a starting point.” Indeed, Kering, which also owns Saint Laurent and Bottega Veneta, shared its goal to cut carbon emissions by 50 per cent and its overall environmental impact by 40 per cent by 2025 with the summit in order to lead by example. 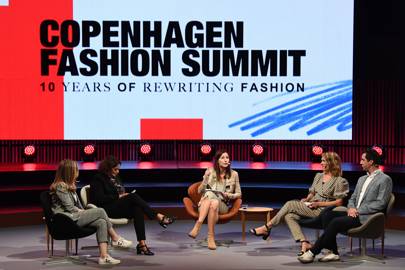 Additional internal targets, such as a push for stricter animal welfare standards in Kering’s supply chain for leather and cashmere products, have been instated. A commitment to only hiring people over the age of 18 has also been put in place to protect model welfare. In 2017, it published a charter in collaboration with LVMH which stated it would no longer represent young persons under the age of 16. The new age restriction will be enforced in early 2020.

“I’m trying to convince peers that we don’t have the solutions, but let’s commit and try to move in the same direction,” Pinault told the audience in Copenhagen.

Posted by FASHIONmode News at 9:52 AM