While the fashion industry is occupied with the Cruise 2020 shows and the looming Met Gala date, Rihanna is at werk in Fenty HQ. The self-proclaimed bad gal dropped a new underwear line under the Savage X strand of her business at midnight on May 1st.

“Don’t sleep on it,” she told her 70 million Instagram followers of the capsule comprising satin basics and daisy-printed smalls. The corresponding post of Rihanna wearing a strapless bra and shades on the @savagexfenty page suggested equal urgency to shop: “Set your alarm sis”. 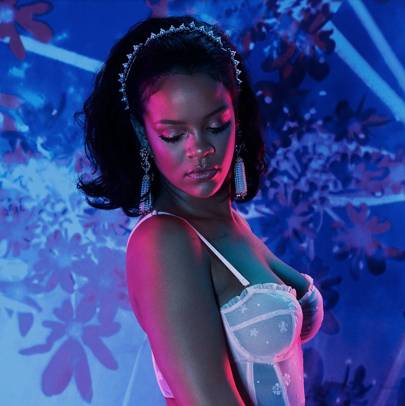 The launch follows Fenty Beauty’s Sun Stalker bronzer activation (again announced via artful Instagram imagery), the premiere of her film project with Donald Glover, Guava Island (at Coachella) and a series of strong personal outfit choices (mostly on Stories). At a Buju Banton concert just days ago in her native Barbados, Rihanna wore one of Virgil Abloh’s debut ballgowns for Off-White. The voluminous yellow-and-grey chequerboard design was premiered on Bella Hadid on the autumn/winter 2019 runway, but Riri, posing next to the artist on the ‘gram, gave it her own personal flair.

The sleuths among us might suggest that she’s building up momentum for a major launch (new music? Her LVMH-backed fashion line, Project Loud France?) but, one thing is for sure, she’s not agonising over a Met Gala 2019 look.

Posted by FASHIONmode News at 11:05 AM