Have We Reached Peak Merch?

Yesterday, Supreme fans were not lining the sidewalks around its New York SoHo flagship for the streetwear brand’s latest “drop”, but newspaper kiosks around the city. By 9.30am, rush-hour commuters who had not secured the latest output from the hype machine – a special-edition cover wrap on the New York Post – had to relinquish hope, and turn to online sellers charging between $7 and $20 for the daily edition. The brand had once again stamped its influence by turning a tabloid news source into a sold-out commodity through the unlikeliest of collaborations: Supreme x Rupert Murdoch.

The redesign, which was published in conjunction with Supreme’s autumn/winter 2018 lookbook, was the first time the publication had dedicated a full wraparound cover to a brand. “We knew that this would be a collector’s item,” New York Post publisher, Jesse Angelo, said of the striking red-and-white design. “Supreme is such a cool brand and we have so much affinity, to the design kinship of the logos, to being bold, and never shy, and New York-based.” 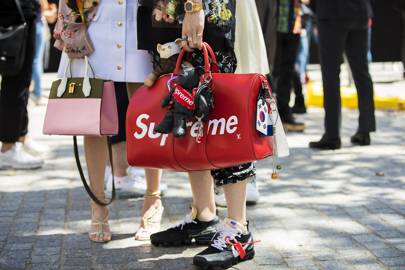 The secret to Supreme’s success is, in part, down to these limited-edition collaborations, and the booming second-hand market the in-demand products generate. Previous fashion tie-ups include Louis Vuitton, Rimowa, Nike and Levi’s, while Kate Moss, Lou Reed and Wu-Tang Clan have taken turns as label ambassadors. Given its partnership with MetroCards last year, the New York Post collab might not seem offbeat for the 1994-founded skateboarding shop – until you consider the polarising politics behind the union. The New York Post has taken a supportive stance on Donald Trump’s policies in the past, whereas Supreme donated a percentage of T-shirt sales to help families affected by the Trump administration’s anti-immigration policies.

Yes, Supreme is having the last laugh by turning a piece of US press into a coveted commercial entity – and perhaps nodding to the president's own business acumen – but are we reaching peak "merch"? And when will the hype juggernaut start to slow down?

Posted by FASHIONmode News at 7:23 PM