There’s a hedonistic spirit to Diesel’s autumn/winter 2018 collection, ‘Stranger and Stronger’, which blends messages of youth and unity with references to fictional 1990s subcultures. Consider it a love letter to London’s bygone late-night scenes. Woven into the sporty silhouettes, grainy denim, and comic-book graphics are hints to the underground styling tricks that once identified British ravers in fields around the M25 orbital, or the cyber-goths who bathed in the neon glow of Electrowerkz’s Slimelight. This was where industrial metalheads collided with club culture; where late nights blurred into morning and fashion potentially offered a passport into a new nocturnal realm.

Hedonism for London’s next generation – here, creative consultant Zaina Miuccia and band manager Basti Robert - carries a powerful sentiment: the belief that shared ideas and real-time action can bring about positive change.“I started out by selling liquorice at music festivals. I now work tirelessly to create a space where musicians can be themselves.” 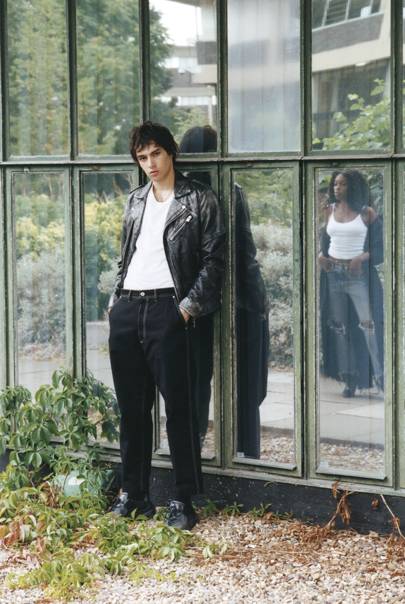 Miuccia’s style story has taken her to London by way of Lagos and Paris, where she is surrounded by the photographers and designers who document and design for the stars of a new underground world. Today her petite frame is swathed in ripped and repaired denim, a pair of metallic cowgirl boots hinting at mischief. She’s chatting animatedly about an upcoming trip to Jamaica, “but maybe France first”. There’s an iconoclastic edge to her fashion sense that defines a modern mood of fearlessness and freedom - a female force who generates change without necessarily being aware of it. How important is her power to move freely from city to city and project to project? “Vital,” she says, adjusting the exaggerated sleeves of an eye-popping fuchsia knit.

Both figures see their networks as central to their creative momentum: “Change starts from the people around you,” Robert adds. “I find inspiration with them to set about doing something that brings the light in.”

Posted by FASHIONmode News at 10:43 AM