With anticipation mounting ahead of Riccardo Tisci’s Burberrydebut at London Fashion Week in September, the Italian designer has unveiled his first major overhaul of the British house: the logo.

Tisci, who took up the role of chief creative officer in May, revealed the new logo and monogram, which uses founder Thomas Burberry’s initials “TB” interlocked in white and orange over a honeyed background, on Instagram. The social posts show a series of emails between himself and British art director and graphic designer Peter Saville, who was commissioned by Raf Simons last year to re-design the Calvin Klein logo.

The exchange signified that the logo was inspired by Tisci’s archive research and a particular 1908 Thomas Burberry monogram that felt contemporary to him. Saville, who was given four weeks to complete the project, championed red and honey as a strong combination. 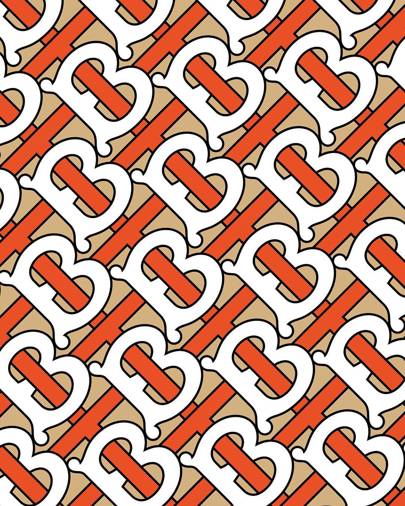 The new brand identity will be used on all channels and in all advertising campaigns from today, in a landmark shift since Burberry's last logo change 20 years ago when the "S" dropped from its name.

The London Fashion Week showcase will also see Tisci put his new product strategy in place. He will release a limited-edition capsule collection as part of his first ready-to-wear offering in order to build on its see-now-buy-now model, and keep the delivery cycle dynamic and fresh. Burberry’s collaboration with Dame Vivienne Westwood will follow in December.

Posted by FASHIONmode News at 8:33 AM