This is the first time a lot of these objects have left Mexico,” Circe Henestrosa tells Vogue of Frida Kahlo’s belongings, which, until 2004, had been locked away for 50 years. Upon the artist’s death in 1954, her muralist husband, Diego Rivera, shut her belongings in a room in their home – the Blue House on the outskirts of Mexico City – out of respect and understanding of how Kahlo's legacy would grow. It took four years for historians to catalogue the some 6,000 photographs, 12,000 documents and 300 items found. And now, many of these personal artefacts and clothes are housed in the V&A as part of its summer exhibition, Frida Kahlo: Making Her Self Up.

“It is the first time a museum has paired her dresses directly with her paintings, and established the really intimate relationship between the two. Her style is as integral to her myth as her art,” Henestrosa explains of the curation. From her Tehuana dresses and striking headpieces, to the corsets and prosthetics that masked her physical impairments, her entire being was an extension of her work.

The exhibition opens with an introduction to Kahlo’s early life with her German father and Mexican mother, and highlights two key events that defined her identity early on: her contraction of polio at the age of six, and her near-fatal accident at 18. The latter “marked the beginning of her career as an amazing artist, but also the real deterioration of her body,” acknowledges Henestrosa. 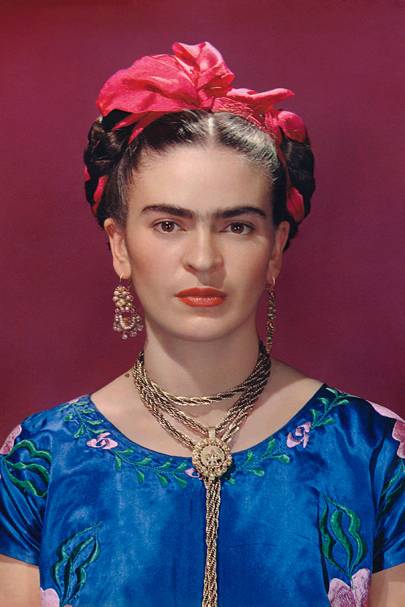 This sense of duality is the central theme of the retrospective, and directly alluded to by the "two Fridas" that seemingly greet guests at the end of the opening passage. As a German-Mexican citizen she felt her family’s roots were in Mexico, but her married life took her to America. Emotionally, there was a chasm between the charismatic “celebrity” that the cameras loved versus the loneliness she felt, and her artistic interpretation of herself juxtaposed with her true self. “I think she felt very torn,” co-curator Claire Wilcox notes, before Henestrosa adds: “It is her construction of identity through her ethnicity, her disability, her political beliefs and her art that makes her such a compelling and relevant icon today.”

A series of self-portraits of her father is shown early on to highlight his direct influence on her own style of self portraiture. The retrospective then opens into a room of curiosity cases and cabinets, which are housed in wooden structures mimicking beds. Kahlo’s sick bed functioned as both refuge and stage, as her mother secured a mirror onto the canopy, so that her daughter could draw her reflection. In lieu of her easel, the plaster of her immobilising corsets became her 3D canvas. “She would cover herself in life, but she would uncover herself in art,” Henestrosa says. Kahlo’s prosthetic leg with the embroidered and bell-embellished boot that she decorated “as if it were a second skin” is also on display amongst the cosmetics and accessories that populate the displays.

Kahlo’s relationship with fashion plays out alongside her political ideology during a time when the country was rediscovering its pre-Columbian roots. “When she first met Diego Rivera she was wearing communist red shirts, trousers and simple skirts,” Wilcox asserts. “The first image we see of her wearing a full-length dress is her wedding portrait... I think it was in the freedom of America [the couple married in 1929 and lived in the United States between 1930-1934] that meant she was able to craft her unique identity.” 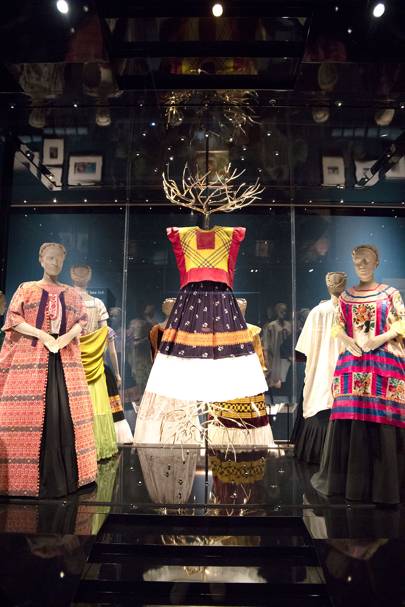 Yet her distinctive wardrobe that bore no resemblance to her peers is entrenched in Tehuana. She was attracted to the way the extraordinary women in Oaxaca’s matriarchal societies dressed because, Wilcox says, “these were proud women who had a certain dignity.” Her dedication to channelling her Mexican heritage is shown through the wear on her clothing. Darns, cigarette burns and stains are present on the pieces, as well as paint and pigment splashes. Archive discoveries, such as a pre-Columbian jade beaded necklace with a tiny dab of green paint, where Kahlo had tried to meticulously match her artist’s materials to her necklace, have brought art historians and fashion historians together to try and uncover the symbolism behind her public persona.

The crescendo of colourful, joyful outfits that we see at the end of the exhibition is the amalgam of Tehuana fashion with pieces from Europe, American beauty products and vintage jewellery that were all utilised by Kahlo to draw the eye upwards and away from her leg brace. “Look at the sophistication of her construction,” Wilcox notes of her wardrobe. “In some ways, it has taken until the discovery of her belongings in 2004 for us to be able to unpick and understand the different components.”

Her performative identity – “she’d insist on dressing for her friends even when she was sick” – is made all the more powerful when we consider her as a spirited, liberated woman operating in a man's world. “Success didn't come to her in her lifetime, but she didn’t chase success through her painting,” Wilcox concludes. "She once said, 'I paint myself because I'm so often alone'. Yet, she was a somebody. In her lifetime she was regarded as a charismatic, unusual and incredibly fascinating creature.” One we are still getting to know now.

Posted by FASHIONmode News at 8:01 PM