This Summer, Jonathan Anderson Wants You To Read The Classics

When the guests arrived at Loewe’s autumn/winter 2018 fashion show, upon each of our seats was perched a bound novel covered in a Steven Meisel-photographed bookjacket. It was a fairly intimidating welcome gift – the premise of reading 600-something pages of Don Quixote in its original language in the middle of fashion month is faintly terrifying – but warmly received nonetheless: after all, who doesn’t want a Meisel-bound Madame Bovary? “You don't have to run away from classicism; you can change the cover and make it relevant for today,” creative director Jonathan Anderson explained backstage of his new publishing endeavour, a sentiment which clearly relates to his vision for the heritage Spanish brand. “For me that's what Loewe is about, incorporating classicism into our work and making it relevant for today's generation.”

He has certainly managed to update Loewe with a profound finesse: in five years the brand has grown with incredible strength, establishing its leather goods as some of the most covetable around and introducing a remarkably appealing ready-to-wear collection. Now, Anderson is adding yet another string to his bow: the series of books he introduced back in February are going on sale at Loewe.com and at the Mount Street flagship. The line-up – featuring Wuthering Heights, The Picture of Dorian Gray, Dracula, Heart of Darkness, Madame Bovary (in French) and a doorstopper Don Quixote (in Spanish) – present the perfect opportunity to glam up your bookshelves (shelfies are still a thing) as well, of course, as revisit the great literary classics. 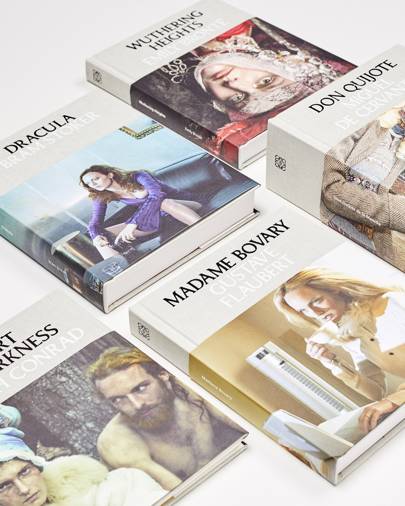 If you’re going to choose one to start with, Anderson feels that Oscar Wilde’s The Picture of Dorian Gray holds a contemporary resonance: “It’s an amazing idea of the idea of vanity and how it relates to today’s world,” he explains (so maybe the shelfie idea is ill-advised). “I have a crazy respect for Oscar Wilde; he was a man with incredible wit and, if we think about celebrity today, he was a celebrity in his period. Also, bottom line, he was Irish.”

But why choose his versions, enshrouded in Meisel’s archive, rather than go for an audiobook or Kindle? “Reading gets into your memory better and I feel, especially when we live in such a digital age, by reading you find things that may not exist on the internet.” That being said, as he sets off on holiday, he is not taking anything with him: Anderson is industrious enough in his working life to require some down time. “I'm planning not to read anything, I'm trying to do as little as physically possible,” he says. Fair play; it is August, after all. The rest of us will channel Stella, revise our Spanish and settle down with Cervante's epic. Such endeavours have clearly paid dividends for him.

Posted by FASHIONmode News at 6:14 PM